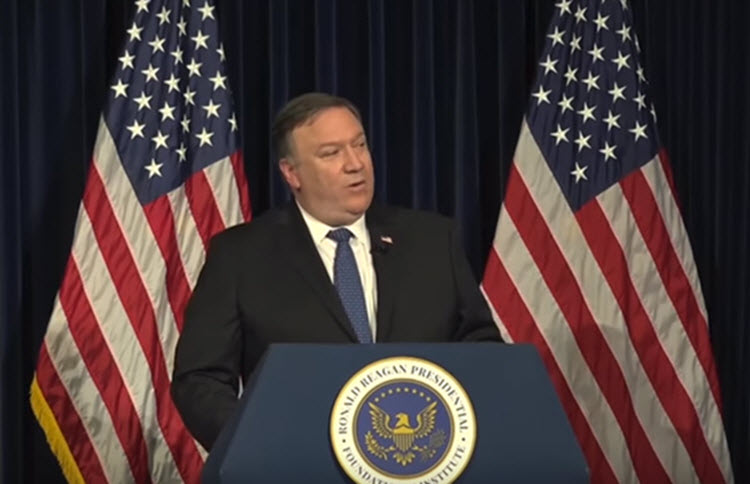 London, 3 August – The Trump administration has put high-level corruption in Iran under the spotlight as they increase their efforts to undermine the mullahs’ rule in Tehran.

US Secretary Mike Pompeo recently called the mullahs “hypocritical holy men” in front of an Iranian-American audience in California, who applauded his assessment.

On July 22, he said: “The Iranian economy is going great but only if you’re a politically connected member of the elite.”

He explained that the Iranian mullahs had “devised all kinds of crooked schemes to become some of the wealthiest men on Earth” while their people suffered intense deprivation, citing Supreme Leader Ali Khamenei’s $95 billion slush fund.

Khamenei’s Setad organisation, the subject of a 2013 Reuters investigation, has stakes in all sectors of the Iranian economy and sometimes takes over businesses without the owner’s consent.

Pompeo said of the company: “Seizing land from religious minorities and political rivals is just another day at the office for this juggernaut.”

He also advised that Khamenei is not the only member of Iran’s ruling class that is stealing from the people, mentioning a leading politician with more than 60 bank accounts to his name and a “billionaire general” who was a former commander in the Islamic Revolutionary Guard Corps (IRGC).

The men in question are Sadeqh Larijani, the head of Iran’s judiciary, and Sadeq Mahsouli respectively.

Pompeo said: “The level of corruption and wealth among Iranian leaders shows that Iran is run by something that resembles the mafia more than a government.”

Ali Vaez, director of the Iran Project at the International Crisis Group, and Ali Fathollah-Nejad, an Iran expert at the Brookings Doha Centre, explained that this corruption among Iranian rulers is nothing new and that Iranians are well aware of this fact, which is why so many Iranians are taking to the streets in protest.

Fathollah-Nejad said: “The money is also used to create a social base and to fortify structures of cronyism. We are dealing with an oligarchy in which political and economic power cannot be separated from each other.”

This corruption in the economy not only helped to line the pockets of the mullahs, but also helps to fund Iran’s interventions into other Middle East countries, like Syria, Iraq or Lebanon.

If the US can keep up its pressure on Iran, this could help fuel the ongoing protests and the overthrow of the ruling dictatorship by the Iranian people and their Organized Resistance. The US should also publically support the protesters and the Iranian Resistance who want a free and democratic Iran.

Iran to use acid to blind and deafen five prisoners

US reaffirms Saturday deadline on Iran, warns of ‘consequences’