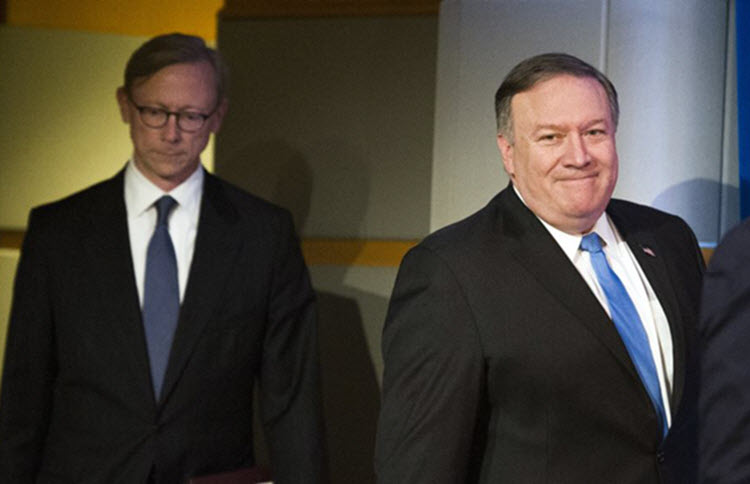 This announcement came as the Trump administration is increasing economic pressure on Iran by restoring sanctions last week, which are designed to get Iran to close down its nuclear weapons programme and end its support for militant groups in the Middle East, where Iran is exacerbating several conflicts.

Hook, who has long pushed for tougher action against Iran, has been leading talks with US allies in Europe and Asia to persuade them to support the sanctions and stop buying Iranian oil by November.

Pompeo said: “The Iran Action Group will be responsible for directing, reviewing and coordinating all aspects of the State Department’s Iran-related activity, and will report directly to me. We are committed to a whole-of-government effort to change Iran’s behaviour, and the Iran Action Group will ensure that the Department of State remains closely synchronized with our interagency partners.”

Hook recently served as a close adviser to former Secretary of State Rex Tillerson and previously worked on Iran sanctions with national security advisor John Bolton, when Bolton served as US Ambassador to the United Nations under President George W. Bush.

The US’s new tough policy on Iran comes after Donald Trump withdrew from the 2015 Iran nuclear deal, formally known as the Joint Comprehensive Plan of Action (JCPOA), in May. The deal, agreed to by six world powers, lifted sanctions on Iran in exchange for supposed restrictions on its nuclear programme. Trump has since said that the US will only lift sanctions if Iran agreed to a stricter deal.

Trump has even said that he would be willing to meet with Iranian President Hassan Rouhani, but Iran has flatly refused Trump’s no-strings-attached talks.

Hook has said that if Iran is willing to change its behaviour – although all evidence says that they won’t – that Trump is “prepared to engage in dialogue in order to find solutions”.

Dennis Ross, a former U.S. official in Democratic and Republican administrations, said that Hook’s new post may be an attempt to bring clarity into the situation.

He said: “It creates an address within the administration for … making the approach a more coherent one, with someone being given broader responsibility across departments to try to shape the policy… The real question is … is the policy going to continue to be just, basically, strong tough rhetoric and sanctions … or is it going to be something more” to curtail what Washington sees as Iran’s destabilizing actions in Syria, Yemen and Iraq?”

Workers set tyres on fire during protest in Iran capital