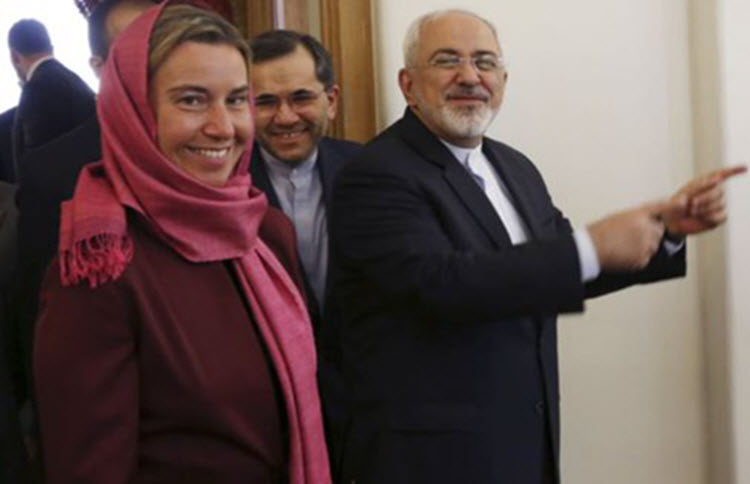 London, 4 Sep – America’s allies in Europe are plotting ways to bypass U.S. sanctions on Iran as they work to keep the nuclear deal alive without the United States.

With a second round of U.S. sanctions set to take effect in November, European officials are working at cross-purposes with Trump’s “maximum pressure” campaign as they try to preserve as much business as possible with Iran. The goal is to persuade Iran’s leaders to stay in the deal for a few more years — perhaps long enough for Trump to be replaced and for a new U.S. president to rejoin the deal.

Among the creative workarounds under discussion in Brussels and other capitals: Devising an alternative — free from U.S. influence — to the current electronic system used to transfer money from place to place, European officials told NBC News.

And since commercial banks must stop handling transactions with Iran or face U.S. penalties, European countries are considering using their own central banks to transfer funds to Iran, wagering that Trump wouldn’t go so far as to sanction an ally’s central bank.

In the last few weeks, U.S. diplomats in Europe have started working to help local companies that do business with Iran find new markets and business opportunities to offset their losses, a senior Trump administration official said, describing a program that has not been made public. The official said that the U.S. Commercial Service — diplomats who work abroad for the Commerce Department — have been holding seminars and reaching out to business groups to find ways to help small and medium-sized businesses find alternatives to Iran.

A spokeswoman for the U.S. Commercial Service didn’t respond to several requests for comment.

The looming sanctions have become the latest flashpoint between the Trump administration and European allies, particularly the three that brokered the nuclear deal with the Obama administration in 2015: France, Germany and the U.K. Those tensions are exacerbated by Trump’s trans-Atlantic trade battle and intermittent hostility toward NATO.

“Europe can no longer rely on the United States alone for its security,” French President Emmanuel Macron said this week.

To the Trump administration, the allies’ efforts constitute an egregious attempt to undermine the president’s foreign policy and ignore the threat posed by Iran’s nuclear program and other troubling activities. Brian Hook, the U.S. special representative for Iran, recently blasted the European Union for making a $21 million payment to Iran, saying it “sends the wrong message at the wrong time.” The Europeans argue the payment shows Europe’s continuing commitment to the nuclear deal.

Trump administration officials have privately blamed President Barack Obama’s top aides, including former Secretary of State John Kerry and top Treasury Department officials, for what they say is an organized campaign to undercut the current U.S. foreign policy. Trump officials pointed to recent speeches, visits to Europe and op-eds by former Obama aides calling for Europe to stay in the deal, suggesting that Obama’s team is aiding foreign countries in evading sanctions.

The president took aim at Kerry more publicly over the weekend, calling him “the father of the now terminated Iran deal” and noting the speculation that Kerry may run against him in 2020. “I should only be so lucky,” Trump wrote on Twitter.

But some economists worry that the overuse of sanctions, particularly when other countries disagree with them, will lead the rest of the world to develop workarounds that may eventually diminish America’s economic dominance. The concern is that other economic powers like China will market themselves as attractive alternatives where international corporations can bank without being told what to do.

Under the 2015 deal struck by Obama, Iran and world powers, Tehran received billions in sanctions relief in exchange for curtailing its nuclear program. Trump pulled the U.S. out of the deal in May. As a result, some U.S. sanctions kicked back in earlier this month, and others take effect in November, including a prohibition on processing financial transactions for Iran.

European officials involved in discussions with Iran say that the Iranians want to stay in the deal despite the U.S. withdrawal, as long as they continue receiving enough economic benefits for it to be worthwhile. Last week the International Atomic Energy Agency, the U.N. nuclear watchdog that monitors the deal, said in a new report that Iran is still complying with its obligations under the deal, despite the U.S. withdrawal.

But the sanctions include a U.S. threat to ban anyone who does business with Iran — even non-U.S. banks — from the American financial system. Because of the dominance of the U.S. banks, nearly every global transaction touches the U.S. in one way or another, even if only for a second as transactions are “cleared.” So the sanctions essentially force businesses and banks to choose between doing business with Iran or the United States.

To big, multi-national corporations, the choice has been obvious. Since Trump announced sanctions would be returning, major companies have started shutting down their Iran-related operations, including auto maker German automaker Daimler AG, French oil company Total SA and both British Airways and Air France, in a blow to the nuclear deal.

“There is clearly money to be made in Iran, but nothing like the business opportunities available in the U.S. market,” said Adam Smith, a former senior sanctions official in the Obama Administration and partner at Gibson, Dunn & Crutcher.

As a result, the Europeans have narrowed their focus to small- and medium-sized businesses that have a footprint in Iran but no U.S. operations, and therefore may be more willing to take the risk.

“There are many companies in Europe able to fall into that category,” said Ellie Geranmayeh, an Iran expert at the European Council on Foreign Relations. “But they need small banks to do the financing, or central banks. People have to be paid, and it has to be converted to local currency.”

That problem has led the Europeans to consider using their own central banks to transfer the money. Under that scheme, a central bank would collect hundreds or even thousands of planned transactions and “bundle” them together, sending the funds to Iran in one lump sum that would then be re-distributed to the intended recipients in Iran.

European central banks that send money to Iran would still be violating the same sanctions as commercial banks, and could be punished. But the countries are betting that Trump won’t, given the dramatic economic implications of the U.S. slapping sanctions on the central bank of an ally.

Yet Iran hawks say if any president would take that risk, it’s Trump.

“I think that actually is realistic under this president,” said Richard Goldberg of the Washington-based Foundation for Defense of Democracies, which advocates for a hard U.S. line on Iran. “There have been so many third rails of trade relations that the president has not been afraid to touch.”

Another major U.S.-flashpoint is SWIFT, a financial messaging service that is used ubiquitously by banks to send money from one place to another. November’s sanctions call for Iran to be disconnected from SWIFT and say anyone who allows them to stay on the system will face sanctions. The U.K., Germany and France have all urged the U.S. to let Iran stay on the system, but Trump is expected to rebuff that request.

SWIFT is based in Belgium, but its board includes top U.S. bank executives from Citigroup and J.P. Morgan, making it difficult for the messaging service to say no to Trump and risk sanctions. So European officials have been looking at creating their own “clearing mechanism” for transactions or alternative to SWIFT so transactions with Iran can continue.

“I want Europe to be a sovereign continent, not a vassal,” French Finance Minister Bruno Le Maire said recently. “And that means having totally independent financing instruments that do not today exist.” The idea has stoked divisions even within European governments. After German Foreign Minister Heiko Maas advocated creating a SWIFT alternative to “protect European companies from sanctions,” German Chancellor Angela Merkel came out against it, warning it could undermine the transparency of the SWIFT system that helps root out fraud and terror financing.

Other ideas the Europeans have floated have sputtered. A proposal to use the European Investment Bank to lend to European projects in Iran was shot down by the EIB’s board, which was loath to risk sanctions.

The European Union this summer also revamped an arcane, little-used law known as the “Blocking Statute,” created in the 1990s to protect European businesses against the U.S. embargo on Cuba. The law prohibits European companies from complying with U.S. sanctions, and threatens to punish those who comply anyway.

That forces European companies who do business in Iran to make a choice: Break EU law by cutting off business with Iran, or break U.S. law by continuing.

But would the EU really punish its own companies for stopping business with Iran? How could they prove it was due to sanctions and not an unrelated business decision?

Those complications have led even EU officials to concede that while the blocking statute sends a powerful diplomatic message — that the EU has its companies’ backs — it is unlikely to be enforced in any meaningful way.

The Europeans have also been scrambling to figure out how strictly they must comply with Trump’s sanctions requiring countries to stop importing Iranian oil. The Trump administration has given mixed messages, at first saying imports must drop to “zero” by November 5, then suggesting there could be some leniency. The law calls vaguely for “significant” reductions, which the Trump administration hasn’t specifically defined.

Some major importers of Iranian oil — like India, Japan and South Korea — are expected to continue to import some oil, creating a game of chicken as countries wager how much they can get away with without Trump punishing them. Another complication is the effect on oil prices and global supply-and-demand.

Other countries are exploring more novel ways to sidestep the oil embargo. Under one idea being discussed, Russia would increase its oil imports under a goods-for-oil barter deal, then rebrand it as Russian oil before reselling it to third countries.
Source: ABC News