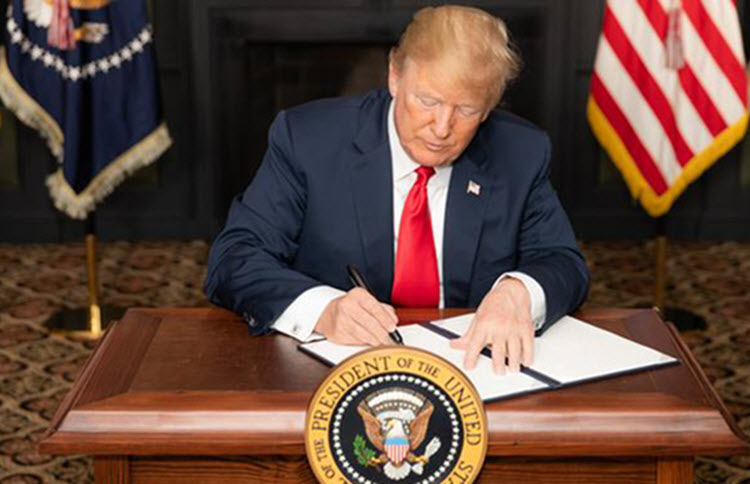 London, 6 Nov – U.S. President Donald Trump announced earlier this year that the United States was exiting the nuclear deal and that crippling economic sanctions would be re-imposed. The first batch of sanctions have already taken effect and they have had a major impact on the Iranian economy.

Yesterday, Sunday 4th November, the next batch of sanctions were reinstated by President Trump.

There is great hope that these sanctions will be the straw that breaks the camel’s back because Iran has disregarded international conventions, regulations and laws to continue its campaign of terror across the region and further afield.

The Joint Comprehensive Plan of Action (JCPOA), commonly known as the 2015 nuclear deal, according to President Trump is “disastrous” and wholly “defective”. And it is true that there are many issues that the agreement fails to address such as Iran’s ballistic missile program and its belligerence across the Middle East, in particular in Syria, Iraq, Lebanon and Yemen.

The sanctions that take effect today regarding the reduction of Iran’s oil exports to zero directly target the countries that buy oil from Iran. The countries that continue to deal with Iran’s oil market will be blocked from the U.S. financial institutions and markets.

Iran is OPEC’s (the Organization of the Petroleum Exporting Countries) third largest oil producer and its biggest buyers include China. U.S. allies South Korea, Turkey and India are Iran’s biggest buyers and they are trying to find solutions to make up the shortfall or to get around the sanctions.

The aim of the deal was for Iran to curb its nuclear program so that sanctions could be lifted. The sanctions that were in place were crippling the Iranian economy so it was a major boost when they were lifted.

However, now Trump is trying to get Iran to change its behaviour and he could see that the nuclear deal was a failure in this respect, mainly because its behaviour has nothing to do with its nuclear ambitions.

Trump’s administration listed 12 demands which must be met before the United States will even entertain negotiating with Iran. The administration wants Iran’s terrorist activities to be addressed and it has made it clear that it will not compromise on this.

The JCPOA dealt with Iran’s nuclear activities and Iran took advantage of this. It did not modify its behaviour – it just made sure that anything nuclear-related was hushed. It used the massive amount of funds to spread terror across the region and much of it was used to fund its terrorist proxies including the Lebanese Hezbollah.

The Trump administration’s crippling economic sanctions may be a catalyst for bringing everyone back to the negotiating table. Trump wants a better deal and, after everything he has said about the current deal, one thing is sure – he will not miss anything. Every term he wants on the deal will be fought for.

Whether this will happen or not is unknown. Only time will tell. In any case, Trump will not be turning a blind eye to Iran in the way his predecessor did.