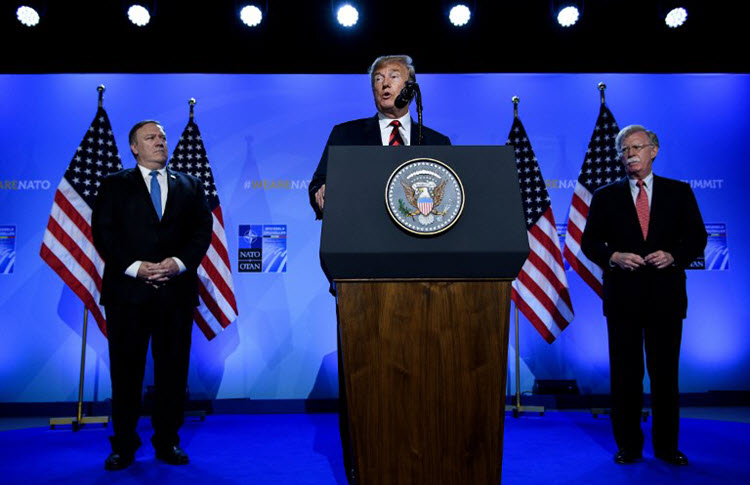 London, 6 Nov – Donald Trump defended on Monday his decision to give waivers to eight countries, including India and China, from the Iran oil sanctions in order to keep global oil prices down.

These ” toughest ever” sanctions on Iran, targeting the country ’s banking and energy sectors, are designed to alter the Iran’s malign behaviour and cut off the flow of money that funds it. Trump vowed earlier this year to get Iran’s oil exports to zero and bring in harsh penalties for countries and companies in Europe, Asia and elsewhere that do not comply.

However, on Monday, US Secretary of State Mike Pompeo announced that eight countries — India, China, Italy, Greece, Japan, South Korea, Taiwan and Turkey – would be allowed to continue purchasing Iranian oil on a temporary basis as they had shown a “significant reduction” in oil imports from Iran. This is slightly confusing for Iran watchers as Japan and South Korea had both effectively stopped importing oil from Iran, while India and China had increased their imports in recent months.

Trump did face criticism for not getting tougher on Iran. House Democratic Whip Steny H Hoyer advised that these exemptions allowed Iran to earn “billions of dollars from oil sales”, while communicating to the rest of the world that others “do not have to abide by the US restrictions”.

However, Senator Bob Corker, the chairman of the Senate Foreign Relations Committee, said that the Trump administration deserves credit for re-imposing sanctions, dramatically reducing Iran’s oil exports and revenues, and imposing maximal economic pressure on Iran to bring them back to the table.

Trump pulled out of the 2015 nuclear deal in May, citing flaws in the agreement, and vowed to reimpose sanctions on Iran; the first of which came into place in August.

US National Security Advisor John Bolton explained that the deal failed to “permanently block all paths to an Iranian nuclear bomb” or address other aspects of Iran’s malign behaviour, like its “ballistic missile development and proliferation”.

Trump also imposed non-nuclear sanctions on Iran throughout the year, as he did on October 16 to target the funding of Iranian terrorism. The day after these sanctions were imposed, the majority of the companies Trump punished saw a huge drop in their share values, losing a combined $293 million in market value.

Call to recognize 1988 Iranian massacre as crime against humanity

Digital Journal: The National Council of Resistance to Iran...

BBC News: Iran has defended its president's call for...