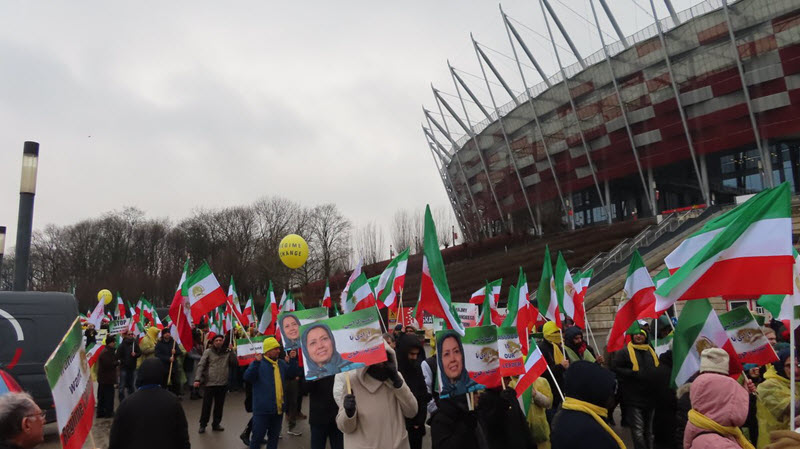 While the Warsaw summit is taking place, Iranian communities are gathering in the city. They are ensuring that the calls for freedom and democracy from the people of Iran are heard.

The Warsaw summit is being co-hosted by Poland and the United States and key members of the international community will be in attendance. This Wednesday morning, the former New York Mayor Rudy Giuliani spoke to the supporters of the People’s Mojahedin Organization of Iran (MEK) outside the Warsaw summit. He said that he was very pleased to be there so that he can converse with government officials about the Iran threat.

Senator Ryszard Majer, a prominent member of the Polish Senate, addressed the crowds gathering outside the summit and said that regime change in Iran can come peacefully and voiced his support for the opposition that is led by Mrs. Maryam Rajavi.

Former US Democratic Senator Robert Torricelli has said that the recent history of Poland can provide hope and optimism to the people of Iran as a clear example that freedom is possible. He highlighted that governments have tried to negotiate with the Iranian regime, but it has decided to choose terrorism, showing that negotiations will never work.

Zbigniew Cichoń, a member of the Polish Senate from the PIS party, said that Iran will very soon be free and highlighted that the people have the “right to fight” for freedom.

Former Prime Minister of Algeria, Sid Ahmed Ghozali, said that the MEK must have the support of the international community because it is “the only force capable of freeing Iran”.

Speaking about the anniversary of the 1979 Islamic Revolution, member of the Foreign Affairs Committee of the National Council of Resistance of Iran (NCRI) Javad Dabiran said that the time for the collapse of the regime is now. He said: “In the past four decades, the people of Iran have risen up. We have gathered here to declare our full support for NCRI President-elect Mrs Maryam Rajavi, the People’s Mojahedin (MEK) and its ‘Resistance Units’ inside Iran.”

A representative of the Iranian youth associations in Europe said that the MEK has been instrumental in supporting the people of Iran. He said that the Resistance Units in the country are leading and directing the protests and that the opposition has widespread support.

He also said that the Iranian regime has not been held accountable for its crimes and that the international community has a responsibility to uphold its own values.

Democrats back off on Iran language