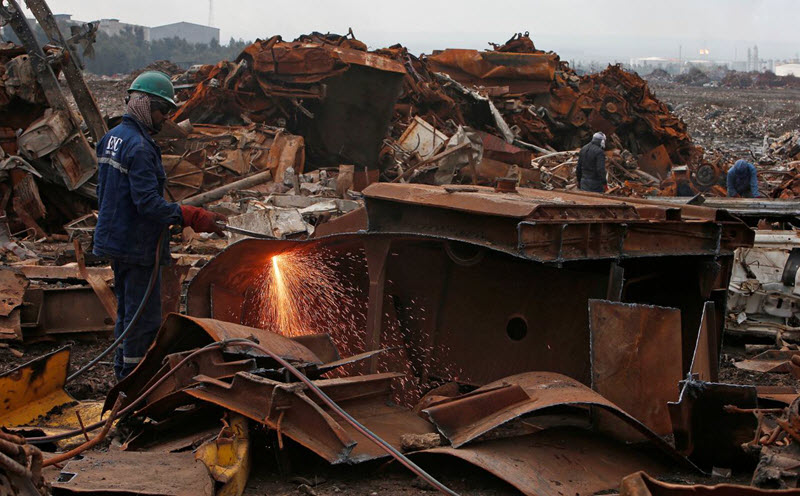 London, 13 Feb – Iran-backed Iraqi militia is seizing scrap metal from car bomb vehicle wrecks and other debris left by the war in Iraq in order to make a quick buck from scrap dealers and funnel the money back to the Iranian Regime.

Scrapyard owners, steel plant managers and lawmakers from Mosul said that the Popular Mobilisation Forces (PMF) are making millions of dollars from wrecked cars, damaged weapons, water tanks, window frames, and whatever they can find to trade in.

The PMF officially denied involvement, but sources say that the militia uses influence and intimidation to corner the market on scrap metal in cities like Mosul and selling it for profit in northern Iraq.

One scrapyard owner, who refused to give his name for fear of retribution, explained that the PMF regularly buy tonnes of scrap metal from him and sell it on to Kurdish areas for up to double the price.

He said: “This yard is controlled by one PMF faction, that one across the road by another. I’m only allowed to sell to specific traders – they’re either members of the militia or have a deal with them. You can’t get scrap metal through checkpoints without a deal with the PMF.”

One driver, known by the alias Alaa, said that the PMF gives permission for transporting scrap and hires drivers for that purpose, while lawmakers and traders reported that the PMF sometimes transported scrap more openly in their own trucks.

Mohammed Keko, the manager of a steel plant near Erbil in the Kurdish region, agreed that the PMF controlled transport of scrap and explained that sometimes the transport was halted for months while militias disagreed on prices or traders could not pay to get cargo through.

The anonymous scrapyard owner from earlier said: “One day two men arrived in a pick-up truck, carrying pistols, and told me to lower the price and sell only to them. I comply – they have guns.”

Worst of all, the steel is not being used to rebuild war-torn areas and much of it is sent to the southern Shi’ite provinces.

Former Iraqi member of parliament Mohammed Nuri Abed Rabbo said: “It’s stealing material that belongs to the state or people. The PMF make double whatever they or their traders buy the scrap for. We’re talking hundreds of thousands of tonnes.”

AFP: World powers will meet for fresh talks with...