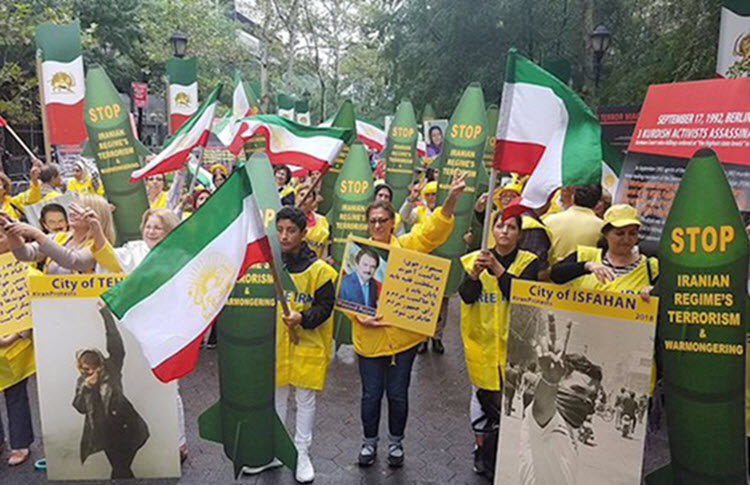 Starting last weekend, the National Council of Resistance of Iran (NCRI) has begun a series of marches and events in various European and the United States in support of the uprising of the Iranian people and the cause of democratic regime change in Iran.

On June 15, thousands of supporters of the main Iranian opposition group People’s Mojahedin Organization of Iran (PMOI or MEK) marched in Brussels, Belgium urging the EU to cut trade with the regime and support the democratic aspirations of the Iranian people. The MEK, also known as the Mujahedeen-e Khalq are the main group within the NCRI coalition.

On June 21, Iranian-Americans will gather in Washington, D.C., in front of the U.S. State Department to urge support for NCRI President Maryam Rajavi’s 10-point plan for a future free Iran.

The next rally will be held in Berlin, Germany, another is planned in the United Kingdom.

Since the beginning of 2018, the people of Iran have taken to the streets to bravely shout their demands for freedom and democracy even as Ali Khamenei, the Iranian regime’s supreme leader, calls the protesters “enemies of Iran.”

But the people who are risking their lives and braving the odds on the streets of every town and city in Iran are not the enemies of Iran.

On the contrary, they are the greatest defenders of Iran, they are the enemies of the tyrants who have driven the country to the brink of deprivation and despair during their 40-year rule of oppression and corruption, according to opponents of Iran’s ruling clerics.

The MEK supporters say Iran’s 80 million citizens are fed up with the corrupt regime that has bankrupted their country while supporting Bashar al-Assad’s bloody civil war in Syria, the vicious Houthi rebels in Yemen, Hezbollah in Lebanon and the ruthless militia groups that are still rampaging across Iraq on behalf of the Iranian regime.

The majority of the Iranian population live under poverty, extreme price rises for basic commodities and a worsening economic situation. Everyday millions of unemployed Iranians can no longer afford to feed their families, while they witness their oil wealth being plundered to fund the export of conflict and terror and to feather the lavish nests of the ruling mullahs, who live in matchless luxury, Iran experts point out.

Iran observers say that unfortunately, over the past 40 years, the West’s policy toward Iran has been dominated by appeasing the mullahs. It is past time that the world unites to show its will to back the 80 million beleaguered Iranians who ache and pray for the removal of this corrupt and medieval regime.

The Iranian-Americans rallying on Friday in Washington plan to say it’s high time the West shows its outright support for the democratic Iranian opposition, the NCRI and MEK, and their charismatic leader Maryam Rajavi. They are poised and ready to restore human rights, women’s rights, freedom, justice and democracy to this long-suffering nation.

US official to talk to UK, Germany on Iran sanctions

Reuters: A senior U.S. official will travel to Britain,...

Reuters: Iranian police said on Tuesday they would launch...