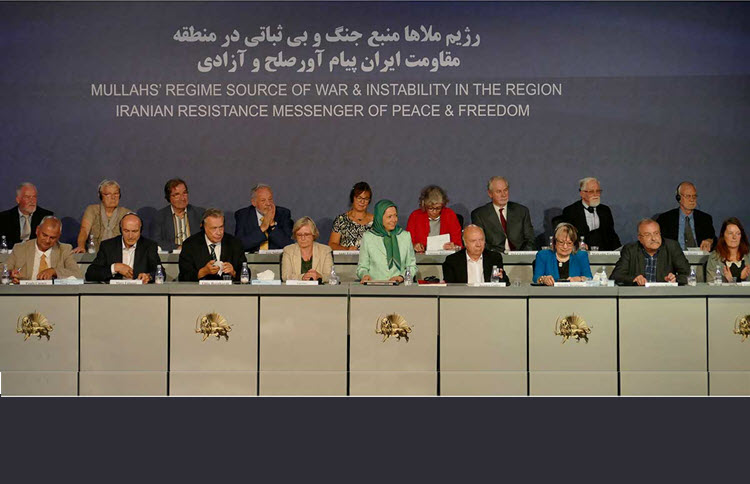 On Saturday, June 29, the compound of the Iranian opposition People’s Mojahedin Organization of Iran (PMOI or Mujahedin-e Khalq, MEK) in Albania, called Ashraf 3, welcomed an international delegation that supported the democratic alternative to Iran’s clerical rule, the National Council of Resistance of Iran (NCRI).

Participants, including parliamentarians, jurists, and civil society figures from all over Europe and Australia, participated in a conference called “The mullahs’ regime, a source of war and instability in the region; the Iranian Resistance, messenger of peace and freedom”, where they discussed the belligerence and terrorism of the mullahs.

The participants, who vowed to hold Iran accountable for its human rights’ violations, expressed their solidarity with the Iranian people’s uprising and Maryam Rajavi, president-elect of the NCRI. They also showed their support for Rajavi’s 10-point plan for a future Iran.

In her speech to the crowd, Rajavi thanked the delegation for attending and sending a “message of solidarity to the people of Iran” who are poised to overthrow Iran.

Rajavi said: “Our nation is not identified by a moribund, medieval regime but by its arisen people determined to achieve freedom, democracy and equality. As such, Ashraf is at the heart of Iran, an Iran that has arisen, the cradle of uprisings and revolution and the home to Resistance Units and Rebellious Cities.”

She noted that Tehran is currently in a critical phase, lashing out at the world through attacks on oil tankers, sabotaging oil pipelines, and shooting down drones in order to distract from the regime’s ‘inevitable overthrow’. The Iranian government even attacked a Japanese tanker when Japanese Prime Minister Shinzo Abe was visiting Iran to mediate between the US and Iran.

Rajavi said: “For their part, an assortment of regime apologists, lobbyists, operatives and agents, who for years had accused the Iranian Resistance and their freedom-loving and humanitarian supporters of being warmongers… Now, have these attacks made it clear to proponents of appeasement that the Iranian regime is the very source of conflict in the Middle East? Or this time, do they want to give the mullahs a peace prize?”

Rajavi advised that the “regime” has only destroyed Iran, so it is so important that the Iranian people will one day “overthrow the mullahs”. She warned Iran’s apologists against continuing to shield the regime and pointed out their hypocrisy in supporting “terrorists” to avoid war.

She then called for more sanctions on the regime, including the blacklisting of President Hassan Rouhani, and the referral of Iran’s human rights abuses’ dossier to the UN Security Council.

Rajavi said: “We call on all countries to join the international front against the religious fascism. The International community, and specifically the European Union, must recognize that resistance is the Iranian people’s right to establish the sovereignty of the people of Iran.”