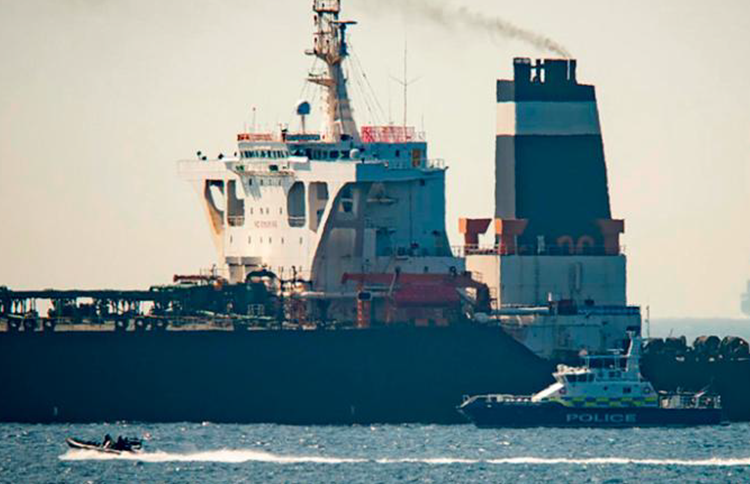 British marines and Gibraltar port authorities detained a supertanker on Thursday that they believed to be carrying crude oil from Iran to Syria in a violation of European Union sanctions.

The ship was detained 4 kilometres south of Gibraltar in disputed waters claimed by both Britain and Spain. The tanker is now impounded.

While Spain said that the vessel had been detained at the request of the United States, as US sanctions bar Iran from exporting any oil, the British and Gibraltar authorities specifically cited the European Union sanctions on Syria.

Fabian Picardo, the chief minister of Gibraltar, said: “We have reason to believe that the Grace 1 was carrying its shipment of crude oil to the Banyas Refinery in Syria. That refinery is the property of an entity that is subject to European Union sanctions against Syria.”

While sanctions do not constitute laws, so it is not illegal to buy or ship Iranian oil or related products, many companies refuse to for fear of being cut off from Europe or American markets (depending on which sanctions are violated).

This is the first time that a tanker though to be head for Syria has been detained at sea since the EU imposed the sanctions in 2011.

Matthew Oresman, a partner with law firm Pillsbury Winthrop Shaw Pittman who advises firms on sanctions, said: “This is the first time that the EU has done something so public and so aggressive…. This is likely to have been meant as a signal to Syria and Iran — as well as the US — that Europe takes sanctions enforcement seriously and that the EU can also respond to Iranian brinkmanship related to ongoing nuclear negotiations.”

Iranian Foreign Ministry spokesman, Seyed Abbas Mousavi, confirmed that the ship was carrying crude oil from Iran, but described the detainment as an “illegal” seizure and said that they had summoned British ambassador to Iran Rob Macaire.

A representative for British Prime Minister Theresa May said she welcomed the “firm action” by the Gibraltar authorities, while Foreign Secretary Jeremy Hunt tweeted praise for Gibraltar and the British marines “for this bold move to enforce Syria sanctions” and said they had denied “valuable resources” to the Syrian government.

White House national security adviser John Bolton praised the seizure, saying that the US and its allies will continue to prevent Syrian and Iranian governments “from profiting off this illicit trade”.

He tweeted: “Excellent news: UK has detained the supertanker Grace 1 laden with Iranian oil bound for Syria in violation of EU sanctions.”

Panama’s Maritime Authority announced on Thursday that it removed the Grace 1 from its international boat registry on May 29, adding that they had been alerted that the tanker, which flies a Panama flag despite Iran claiming ownership of it, had participated in or was linked to terrorism financing.