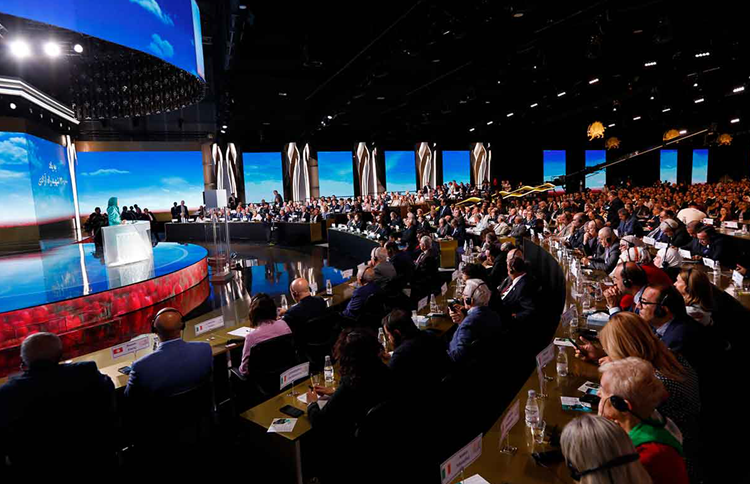 Every year, the Iranian Opposition People’s Mojahedin Organisation of Iran (PMOI), also known as the Mujahedin-e Khalq (MEK), and the National Council of Resistance of Iran (NCRI) hold a grand gathering for a Free Iran. It is usually held in Paris, but this year it was held at the new home of the MEK in Albania – Ashraf 3.

Rajavi highlighted that “regime change” is the only option because moderation is not possible. She said that the people can effectuate regime change and pointed out that Massoud Rajavi insisted on the same many decades ago. He said: “For a nation to appreciate her own freedom, she must ultimately free herself on her own. Everyone can only free himself on his own from the yokes of coercion and oppression. And it is precisely for this reason that we are responsible to advance the goal of a general uprising for the freedom of our people and our country.” Maryam Rajavi said that this is very much applicable today.

The leader of the Iranian opposition also highlighted the intentions of the MEK, saying that it is determined to create a “new future” that does not feature tyranny or discrimination. A future that sees Iran free and prosperous. She reassured everyone present that the Resistance will “take back Iran”.

Rudy Giuliani, the former Mayor of New York and personal attorney to the US President, called on all EU governments to stand up to the regime, saying that it is shameful for them to turn their back on the people, especially when the Europeans paved the way for democracy many years ago.

He also said that the MEK “freedom fighters are going to free Iran and they will be remembered for their role forever.

Former United States Senator (I-CT) Joseph Lieberman said that the “regime’s rule” is coming to an end because it is getting weaker and weaker every day. He also highlighted that in present times where democrats and republicans in the United States are clashing so frequently, one thing can be agreed upon – and that is that regime change must happen.

Member of European Parliament and former Interior, Foreign, Defense and Justice Minister of France Michèle Alliot-Marie praised the MEK for coming on so far with courage and determination. She said that the people of Iran and the MEK will very soon get the peace, freedom and happiness that they deserve.

Former Prime Minister of Canada Stephen Harper also pointed to the complete absence of moderation in the regime and proudly affirmed that his country has closed the Iranian regime’s embassy in Canada and called on other governments to do the same. He identified the Iranian regime as the most dangerous regime in the world.

Former French Foreign Minister and co-founder of Médecins Sans Frontières Bernard Kouchner congratulated all those involved in establishing Ashraf 3. He also paid tribute to Maryam Rajavi who he profoundly admires.

Former Prime Minister of Albania and Member of Parliament Pandeli Majko, former Deputy Minister of Interior in Albania Elona Gjebrea and MP and Leader of Albania’s Republican Party Fatmir Mediu spoke for the Albanian delegation. They warned the regime not to “push us” and said that they want to be part of the efforts to free Iran – they do not want to be seen as one of the countries that did nothing.

They also reaffirmed their support for the MEK and said that the entire government, although it disagrees on many issues, fully agree that the Iranian cause must be dealt with.

The UK delegation was represented by Members of British Parliament Matthew Offord, Bob Blackman and Roger Godsiff, Member of British House of Lords, former Energy & Climate Change Minister and former International Development Minister Baroness Verma, and Member of the House of Lords Lord Mark McInnes. They said that they will continue to press the British government on matters related to Iran and will encourage it to back Maryam Rajavi’s 10-point plan for a future Iran that includes values shared by the United Kingdom.

Former Secretary of Homeland Security Tom Ridge applauded the MEK’s resilience and kindness and said that it is going to be remembered in history for freeing Iran and providing future generations with rights that many take for granted.

Former Prime Minister of Algeria Sid Ahmed Ghozali, Member of Tunisian Parliament Mahmoud Kahri, Member of Moroccan Parliament Khadija Ziyani and Secretary General of the Syrian Coalition Mohamad Nazir Hakim spoke for the Arab delegation. They said that the MEK is not alone and that they want to see peace as much as the people of Iran.

Former Director of the FBI Louis Freeh said that the exhibition showing snapshots of the long struggle of the people of Iran is not a museum, rather it is “evidence” – evidence that can be used when regime officials are eventually tried and prosecuted.

Mayor of Paris’ first District Jean François Legaret and Member of French National Assembly Michèle de Vaucouleurs spoke for the French delegation. They said that human rights are of utmost importance and must never be shunned in favour of economic relations. Legaret announced that Paris’s District 1 had declared Ashraf 3 as its sister city.

Marc Ginsberg, former U.S. Ambassador to Morocco and White House Middle East Adviser, said that he cannot wait for the day that a new US embassy opens up in a Free Iran. He said that he has faith in the people of Iran and the MEK that backs them.

Former German deputy interior minister Eduard Lintner and Member of Bundestag (German Parliament) Martin Patzelt highlighted that the whole world would benefit from regime change because the mullahs are at the centre of all problems in the region. They warned the regime that it will not win this fight.

Former Senator and Presidential Candidate of Columbia Ingrid Betancourt said that after spending some time in Ashraf 3, she can confirm that it is not a closed compound as the Iran apologists claim. She said that the Ashrafis are living in freedom, while fighting for freedom for the people of Iran.

Hadassah Lieberman said that as the daughter of Holocaust survivors, she wants the Resistance to continue to shine to change the darkness.

Former French Minister of Human Rights Rama Yade spoke about the role of Albania in helping the MEK move forward. She described Albania as being a “small country” but one that has a “big heart”.

Vice Chair of UN CEDAW Committee Bandana Rana, UN Special Rapporteur on Violence against Women (2003-2006) Yakin Ertuk, UN Special Rapporteur on Violence against Women (2009-2015) Rashida Manjoo, Minister of the High Court of Justice of Entre Rios Argentina and President of the International Association of Women Judges Susana Medina, Deputy Attorney General of Portugal Maria Candida Almeida and Director of the Center for Social Research in Delhi Ranjana Kumari spoke about the role of women in the MEK. They highlighted that they had a strong female leader in Rajavi and pointed out that the current generation of Iranian women are showing tremendous courage in ensuring their voices are not silenced.

Ambassador Robert Joseph, former US undersecretary of State for Arms Control and International Security, pointed out that 120,000 people have been killed by the “evil” regime and that this is not something that can be ignored. He also said that the MEK, despite its long struggle, does not have bitterness in its spirit. Rather, its spirit is “amazing” and will lead the people to freedom very soon. “The truth is your most powerful ally,” he said.

Gen. James Conway, former Commandant of the U.S. Marine Corps and Gen. George Casey, former Chief of Staff of the US Army, spoke about their first-hand experience with the regime that uses terror to achieve its political and ideological ambitions. They said that asking Iran to behave like a “normal country” is not too much to ask and any government that does not agree is not a credible part of the international community.

Former Minister of Publicity Saleh Al-Qalab and Member of Jordanian Parliament Issa Khashashneh spoke for the delegation from Jordan. They praised Rajavi’s leadership and said that she will bring Iran to the place it belongs. They said that the clerical regime is setting Iran back in time.

Former UNAMI Special Representative Ad Melkert said that the MEK is central to the fight for freedom and declared his full support for everything it is trying to achieve.

Former US Assistant Secretary of State for Political-Military Affairs Ambassador Lincoln Bloomfield agreed with Ingrid Betancourt’s rejection of allegations about the Ashrafis not being free. He said that any accusations about Ashraf being a cult are completely false. The people are dedicated to being free and achieving freedom for the people of Iran.

Lars Rise, former Member of Norwegian Parliament, and Kimmo Sasi, member of Finnish Parliament and former Minister of Commerce, spoke for the Nordic delegation, declaring their support for the movement that is ready for freedom. They also said that the MEK stands for the truth and it will achieve its goals.

Reuters: The family of a former FBI agent who...

Iran’s Banks Are a Major Source of Corruption

The main job of the banks in Iran is...