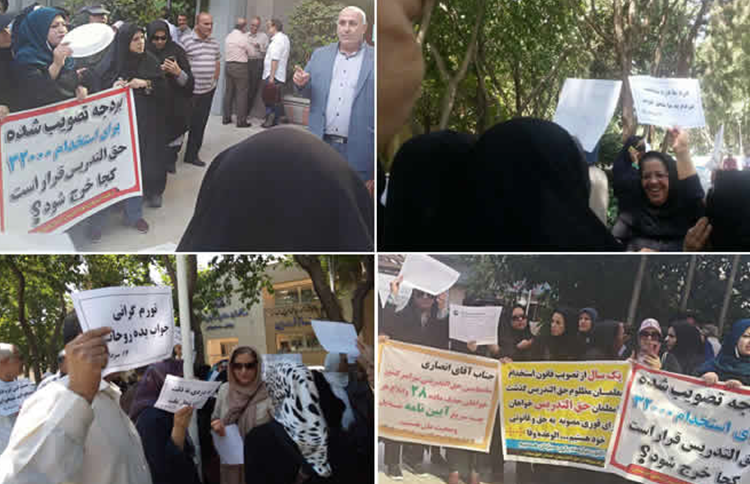 Over the past few days, teachers across Iran have been holding protests and calling for the authorities to ensure that their most basic rights are recognised and so that they receive the salaries that they are due.

Earlier this year, a large number of working and retired teachers took to the streets. They protested about the poor working conditions that they are subjected to and they highlighted the poor levels of pay that they have access to.

The teachers also called on the government to immediately release the imprisoned teachers that have been arrested and locked up by security officials.

In the most recent teachers protests, many contract teachers gathered in front of the Ministry of Education building in Tehran on Sunday 4th and Monday 5th August. They were heard chanting slogans about how they will not accept discrimination.

The contract teachers also referred to the lack of laws for contract teachers. Last month, educators gathered outside the National Organization of Employment Administration building to call on the government to implement an act that was adopted by Parliament three years previously. The act would allow the Ministry of Education to put teachers and educators that are on temporary contracts onto permanent ones.

The contract teachers have been chanting; “We do not want promises, we want the implementation of the law. I am not leaving here until I get paid.”

In the province of Khuzestan, a number of preschool educators gathered in front of the Education Department building in Ahvaz in protest against their working conditions on Sunday 4th August. The following day, there was a protest in Tabriz, where retired and employed educators protested about the government’s lack of attention to their demands. They gathered in front of the Education Department building and were seen holding banners reading “We want an increase in teachers’ salaries” and “The teacher’s place is not in prison”.

Also on Monday 5th August, many teachers – both currently employed and retired – held a protest in front of the Education Department building in Isfahan. There were security officials present and they took great efforts to ensure that more people did not join in. A number protesters were pushed around by security officers and people were banned from taking photos. Anyone seen holding a phone was arrested.

On the same day, retired and employed teachers gathered in front of the Education Department building in Khuzestan. They called on the government to increase the salaries of teachers so that it is above the poverty line. Of all government employees in Iran, teachers are among the most poorly paid. Many teachers are living in absolute poverty because of their low salaries and their working conditions are extremely poor.