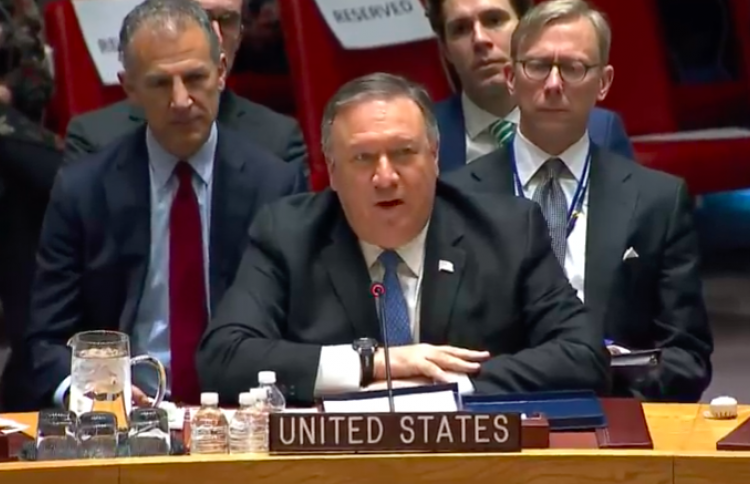 In a message on Twitter, US Secretary of State Mike Pompeo called on the international community to increase pressure on Iran. He warned that the UN arms embargo on Iran is soon to expire.

The message read: “The clock is ticking. Time remaining before the UN arms embargo on Iran expires and Qasem Soleimani’s travel ban ends. We urge our allies and partners to increase the pressure on the Iranian regime until it stops its destabilizing behavior.”

Secretary Pompeo included a link to a memo on the US Department of State’s website which listed other sanctions that are due to run out imminently. It pointed out that Qasem Soleimani, the commander of the notorious Islamic Revolutionary Guard Corps (IRGC) will see his travel restrictions lifted in October next year.

Then, the Iranian “regime” will soon after be allowed to sell weapons to whomever it chooses. This means that the regime will be able to arm its many terrorist proxies around the world. The regime will also be able to buy air defense equipment, tanks, missiles, and so on.

The US Department of State emphasised that Iran’s “regime” is the number one state sponsor of terror in the world and highlighted that for four decades its “malign behavior and support for terrorist proxies has spread uncurbed”.

The memo also reiterated that the United States exited the Joint Comprehensive Plan of Action (JCPOA), or 2015 Iran nuclear deal as it is known, because it “placed even more resources and money at the regime’s disposal, furthering the reach and aggression of their malign activities”. The State Department said that it put the decisive sanctions in place to “curb the regime’s ability to fund terror”.

The Trump administration has also said that it is putting “maximum pressure” on Iran with the hope of bringing it back to the negotiating table. However, the Iranians have not been very receptive to the idea. Iranian President Hassan Rouhani recently said that if the US wants to negotiate, it must start by lifting all sanctions on Iran.

The Iranian president has also said on a number of occasions that the sanctions on Iran are an act of “economic terrorism”.

The Trump administration has been targeting key Iranian officials. Foreign Minister Mohammad Javad Zarif has been sanctioned by the US, as has Supreme Leader Ayatollah Ali Khamenei. Iran’s ambassador to the United Nations Majid Takht Ravanchi has said that he is not happy with the sanctions and wrote to UN Secretary-General Antonio Guterres, saying the sanctions on Zarif are “illegal” and that the Trump administration is “waging economic terrorism against the Iranian people and bringing pressure to bear on their representatives”.

The ambassador also said that the United States is shunning diplomacy – “one of the greatest achievements of humanity to preserve and uphold peace and security among nations”.

However, it must not be forgotten that behind diplomatic issues like these, there are people. And according to some Iran observers, the people of Iran have made it very clear that they want the cruel and brutal regime to be put under as much pressure as possible.

An international people’s tribunal held in London finished its...

U.N. official in Iran to press for nuclear answers