Zarif’s Beggary in G7 and Why Is the EU Wrong 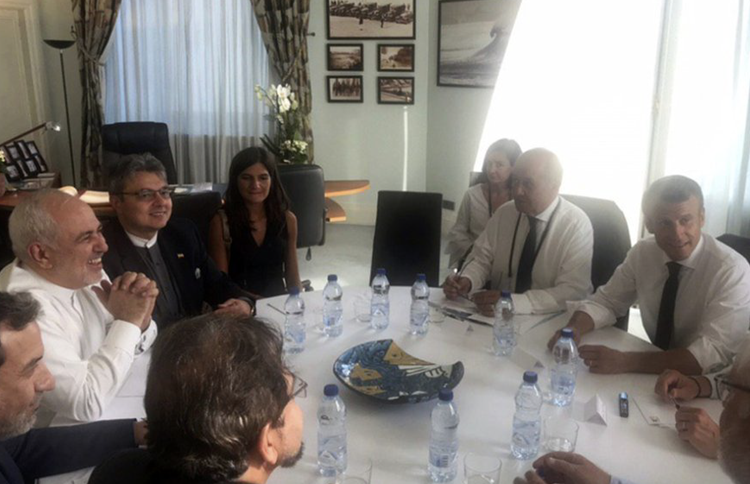 A White House official said France’s invitation to Zarif for talks on the sidelines of the gathering was a “surprise”. Zarif met his French counterpart to assess what conditions could lead to a de-escalation of tensions between Tehran and Washington, a French official said.

But on the other side US President Trump twitted that: “They’ve got it all wrong, from Iran, to…

In France we are all laughing at how knowingly inaccurate the U.S. reporting of events and conversations at the G-7 is. These Leaders, and many others, are getting a major case study of Fake News at it’s finest! They’ve got it all wrong, from Iran, to China Tariffs, to Boris!

Zarif also saw French President Emmanuel Macron during his brief stay. White House official said that the Iranian minister did not meet any US officials before he flew out of Biarritz airport.

Trump withdrew from the 2015 nuclear deal between Iran the world powers last May. And later imposed two rounds of sanctions on Iran. Iran, in turn, has scaled back its compliance with the 2015 deal. But the European did not agree with Trump’s decision to leave the agreement and try to help Iran to evade the economic sanctions imposed by the US.

In a tweet to weeks ago US President Trump told that: “Iran is in serious financial trouble. They want desperately to talk to the U.S…

But what exactly will Iran?

Iran is trying to impose the other side of the deal to accept a minimum export of 700,000 barrels per day of its oil and ideally up to 1.5 million bpd and get paid in cash! if the West wants to negotiate with Tehran to save the 2015 nuclear deal! And told that the ballistic missile program cannot and will not be negotiated as an Iranian official said: “We have underlined it clearly and openly!!!”

Other Iranian diplomat said Iran had also ruled out any negotiations of its “right to enrich uranium, its home-made nuclear fuel cycle!!!

The truth is that Iranian oil exports dropped in July to as low as 100,000 dpd due to sanctions. And Iran need immediately the money supports their allies like the Hezbollah, Hamas and the Houthis. That’s the reason why they want it in cash! and the reason why Zarif hustle to the G7. The country is out of money.

And what did the EU wrong on Iran:

The EU is closing their eyes on the reality that they can’t save the nuclear deal. Iran has breaching the agreement’s 300kg limit on enriched uranium, and as Iran president Hassan Rouhani told a few weeks ago they will continue that path. Iran will and can’t stop their aggressive, expansionist and destabilizing behaviors. And that’s the reason why the US government will not set back from the sanctions and the pressure. And is also trying to form a coalition to counter Iran’s hostility.

Even after the deal Iran did not stop their terror attacks and destabilizing the Middle East. Like the assassination in The Hague in November of Ahmed Mola Nissire, and an attempted terrorist attack in June 2018 on the Iran convention in Paris.

So in brief G7 leaders must unite against Iran’s global threats, and they must stop ignoring the reality and trying to keep the malformed nuclear deal alive.

AP: Iran has reinstated an offer for U.N. nuclear...