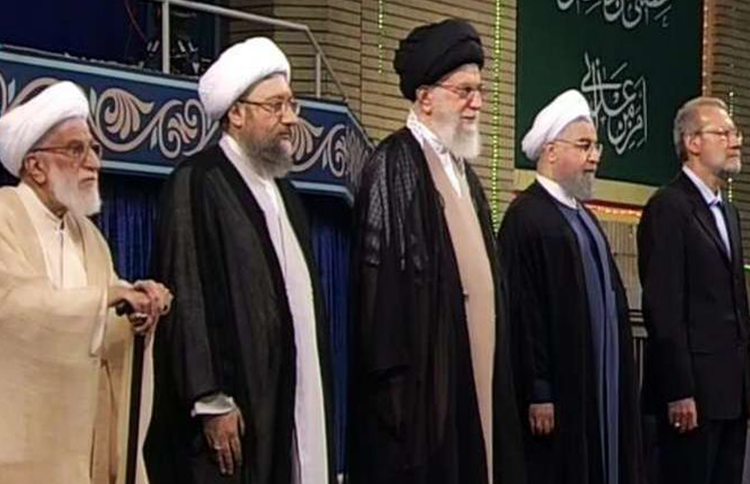 Governmental embezzlement has been going on in Iran for years, but now, because of domestic problems, international pressures and economic problems in Iran, large-scale specimens have come to light.

For example, a senior central bank official, Salar Agakhani, comrades of Ahmad Aragchi, nephew of Aragchi (Deputy of Foreign Minister Mohammad Javad Zarif). in 12 August 2018, according to the state-run Tasnim News Agency, Agakhani was among the market disturbers. he committed an embezzlement of 200 million dollars. He is being identified and arrested by the police on 11 March 2019.

yet Aghakhani was released shortly after the Central Bank authorities communicate with the police. He fled Iran after his release and his whereabouts are unknown.

“1.3 billion dollars in medical equipment, has vanished to the air and it has not been clarified it who imported and exported this amount of good”. Minister of Health and Sanitation, Said Namki, said to the state-run Tejarat news, in July 15, 2019; referring to the organized corruption in the field of medicine and medical equipment.

Recently the state-run Fars news agency, published a letter of Alireza Zakani, former Iranian parliamentarian, to the head of Iran’s judiciary, about the corruption in Iran’s petrochemicals industry and said, “The special Court against the economic corruption is in charge with a special case about the corruption in the petrochemical commerce. It is worth dealing with the disruption of 6.6 billion euros”
in 22 August, 2019, Radio Farda, in a breaking news informed that two Iranian MPs were arrested for corruption.

Fereydoun Ahmadi and Mohammad Azizi are both current members of parliament and were Ahmadinejad’s directors during his presidency. Their corruption was exposed so that the government had to arrest them to cover up the matter.

Last week, arrestment of a person affiliated to one the regime’s faction, triggered a new series of infightings between the two former chiefs of judiciary.

Mohammad Yazdi and Sadegh Amoli Larijani, the current chief of the expediency Council and former chiefs of the Iranian judiciary and the closest government officials to Ali Khamenei, have severely accused each other of corruption and embezzlement in separate letters, and it became a tension within the government.

in 19 August, 2019, state-run ISNA published a letter from Makarem Shirazi to both of them. Calling the possibility of a popular uprising a riot he wrote, “Dear brothers, the experience has shown that such disputes only results in escalating disagreement between people and triggering another riot.”

Former head of the Football Federation, Mohammad Dadekan, said in a recent video released on social media. “We ask why can’t you make money? They say sanction. What does sanction mean? You are the sanction, God is witnessing, not America, if we want to rate the elements put out this situation, we have to say America is the fifth grade. You are the first. The first one to be tried are the authorities themselves. What do you want to fool people with? They say we got the guy, we got the guy, who gave them the money?”

Of course, these are questions that are always left unanswered because one cannot go beyond a certain point. While workers, teachers, nurses have been deprived of their salaries for months, corruption has been institutionalized in all cells of the ruling system. This is about astronomical figures. Former MP Alireza Zakani said in a live interview with state television recently: “I have been fighting against economic corruption in Iran about 20 years, and I have never seen economic corruption without one of the great governmental powers behind it. I tell you this frankly.”

in 2013 Reuters unveiled 95 billion dollars fortune for the first time in just one of Khamenei’s assets called Imam-led setad.

On April 2019, the US Embassy in Iraq cited credible sources on its official Facebook page:

“Corruption in the Islamic Republic has grown from the top of the power pyramid to all its components over the past 40 years … only the assets of Ali Khamenei, the Supreme Leader, reach 200 billion Dollars.”

As we go further, more governmental corruption cases are being disclosed, and this is a sign of the end of this regime. The economic problems in Iran is not the question of the last few years, it is the result of 4 decades systematic corruption by the regime that has taken over all the assets of the Iranian people and also spent the wealth of the Iranian people on proxy wars in the region. But today, the clock seems to be ticking for the current regime.

AP: The mothers of three American hikers held in...

Sunday Times: In a show of defiance against western...