US: Maximum Pressure Will Continue on Iran 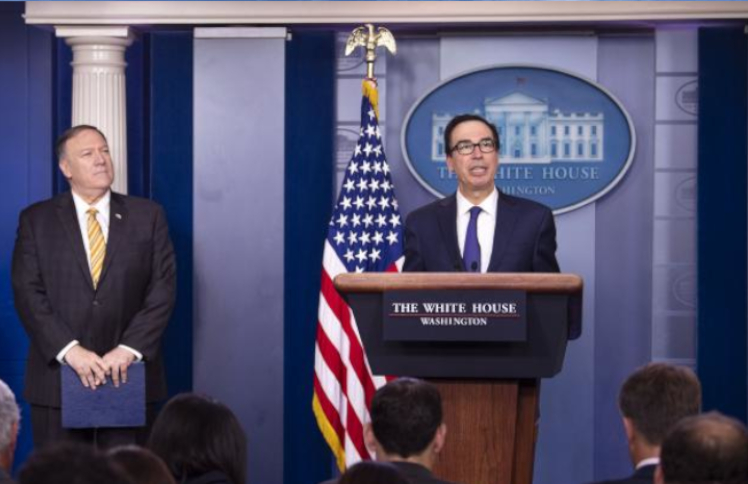 U.S. President Donald Trump has no plans to meet with the Iranian President Hassan Rouhani while he’s in New York for the United Nations General Assembly later this month, according U.S. Treasury Secretary Steven Mnuchin.

Mnuchin said Thursday that such a meeting is “not planned at the moment,” even though Trump has made clear “he would sit down with Rouhani with no condition” to discuss Iran’s nuclear program.

He says he and Secretary of State Mike Pompeo “have been executing the president’s maximum pressure campaign” so there’s no “sea change.”

U.S. policy on Iran is the president’s policy, who has vowed to continue the maximum pressure campaign, including severe sanctions on Iran’s oil exports, until Iran stops its disruptive behavior.

Last weekend, Iranian officials announced the third step in an unfolding series of ultimatums, whereby Tehran progressively ratchets up its violations of the 2015 nuclear deal, formally known as the Joint Comprehensive Plan of Action (JCPOA), unless Europe offsets the U.S. sanctions.

In response, on September 10, the U.S. Secretary of State Mike Pompeo tweeted:
“The Iranian regime’s lack of full cooperation with @iaeaorg raises questions about possible undeclared nuclear material or activities. This fits into Iran’s 40-year pattern of lies. The world won’t fall for it. We will deny the regime all paths to a nuclear weapon.”

Iran is showing the world that they will not change their policy and they are lying. They have disavowed that they will not deliver oil to Assad’s regime. The U.S. State Department said on September 12 that Iran has been breaking “promises” after the Iranian tanker Adrian Darya 1 allegedly delivered oil to Syria despite assurances to the contrary.

“This fits into the web of lies perpetrated by the Iranian regime for 40 years,” State Department spokeswoman Morgan Ortagus told reporters in Washington. “Their deception and broken promises are not just aimed at the international community, but the Iranian people too. Despite the revolutionary promises of a better society, the thugs in Tehran have consistently repressed women, minorities, and human rights advocates.”

All the signs show that the “maximum pressure policy” on Iran will not end, while Iran has not the capacity to step back, and the chances of US government changing its policies are very low.

As a fact, UANI tweeted that: In Baghdad, less than a mile from the U.S. Embassy – Iran-supported Shiite militias have taken out billboard ads with the slogans “Death to America – Death to Israel”!!! That’s all shows that the main problem is by Iran’s side and not the International community.

Iran may increase electricity prices by 20% in March, Mehr says

Bloomberg: Iran may raise electricity prices by about 20...