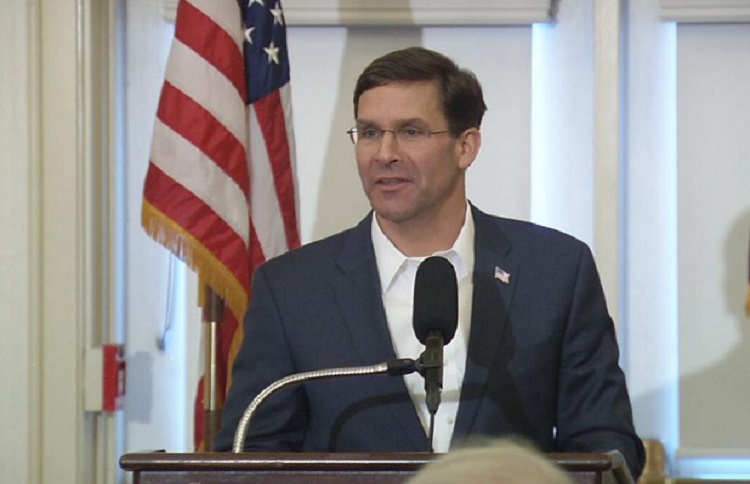 He has already met the head of US Central Command and is likely to meet King Salman and Crown Prince Mohammed bin Salman soon to reassure them over bilateral ties.

Tensions have been increasing between the US and Iran since May 2018, when the Trump administration, pulled out of the international accord that gave sanctions relief to Iran in exchange for supposed limits on its nuclear program, citing Iran’s non-compliance with the accord and its belligerence actions.

Following that, there were a series of attacks on oil tankers and installations in the Middle East that the US and others attribute to Iran. Due to that, the US has sent 3,000 additional military forces to the area since May 2019 in order to bolster Saudi defenses. One senior US defense official said America still wants to be seen as a dependable choice of partner for countries in the region.

The official said: “The Gulf [countries], they feel vulnerable. They feel exposed, understandably so.”

Indeed, Gulf countries have a reason to be concerned. At the end of last month, the National Council of Resistance of Iran‘s (NCRI) US Representative Office held a press conference to reveal top-secret intelligence that one of their groups, the People’s Mojahedin Organization of Iran (PMOI, Mujahedin-e Khalq or MEK), gathered from inside the Iranian government.

During this press conference about the missile and drone attack on Saudi Arabia’s oil facilities carried out by Iran, the NCRI said that a new squad from the Revolutionary Guards (IRGC) air force entered Omidiyeh base, from where the missile attack was deployed, on September 22 and it is not yet known what their orders are.

The NCRI also revealed that the attack was ordered by Supreme Leader Ali Khamenei and approved by the Supreme National Security Council (SNSC), which includes President Hassan Rouhani and Foreign Minister Mohammad Javad Zarif, back in July.

NCRI-US Deputy Director, Alireza Jafarzadeh said that the IRGC commanders and personnel with expertise in missiles and drones were deployed to Omidiyeh base to conduct the attack and that they reported directly to IRGC Major General Gholam-Ali Rashid, commander of the central headquarters Khatam- al Anbiya.

In related news, military officials from Arab countries, the US, the UK France, Germany, Italy,  were Pakistan and South Korea met in Riyadh on Monday to discuss freedom of navigation and Iranian activities in the region, following the attacks on oil tankers attributed to Iran and Iran’s seizure of a British-flagged tanker.