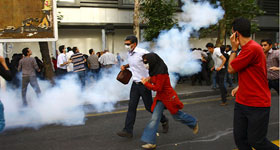 The move follows two years of intense pressure on Rafsanjani by hard-liners, who accuse the 76-year-old Shiite cleric and his family of being too close to Iran’s political opposition.

Also Tuesday, security forces and protesters faced off in the center of Tehran during a demonstration called by female activists and opposition groupsto commemorate International Women’s Day. But the demonstrators refrained from provoking authorities, witnesses said.

“Security forces are acting calm. People are avoiding confrontations,” one witness said in a telephone interview.

The scheduled session to elect leaders of the Assembly of Experts started unusually late, with the members waiting for Rafsanjani’s designated successor, Ayatollah Mohammad Reza Mahdavi Kani, 79, to be brought into the chamber in a wheelchair, the semiofficial Mehr News Agency reported. The 86-member assembly of Islamic scholars has the power to elect, supervise and remove the supreme leader, Ayatollah Ali Khamenei, Iran’s highest-ranking religious and political authority.

In an apparent move to avoid a politically damaging defeat, Rafsanjani announced his withdrawal before his challenger entered.

“If Mr. Mahdavi Kani agrees to accept the responsibility of leading the assembly, I will not seek the candidacy so that this holy body is not harmed,” Rafsanjani said, according to the official Islamic Republic News Agency.

Mahdavi Kani was then elected chairman of the body by a large majority. Rafsanjani, who had been head of the assembly since 2007, remains a regular member.

Rafsanjani’s departure as the leader handed a victory to supporters of President Mahmoud Ahmadinejad. It also represented the nearly complete purge of a political faction that called for more personal freedom and a modernization of the role of Islam in Iran’s political system.

The purge started after Ahmadinejad’s disputed reelection in 2009 led to widespread anti-government protests that Iranian leaders blamed on a “reformist” faction that considered Rafsanjani a sympathizer. Most of its leaders are now in prison and their parties are dissolved.

But some analysts said that forgoing the assembly’s leadership could also be a shrewd political maneuver by Rafsanjani, who is widely regarded as the No. 2 man in Iranian politics.

Lawmakers said Mahdavi Kani decided to run for chairman only at Rafsanjani’s request. The incoming leader is considered a strong protector of the clergy, which warily views the government as steadily reducing the influence it gained after the 1979 Islamic revolution.

“Rafsanjani can now operate off the radar, without government supporters watching his every move,” said Abbas Abdi, an analyst critical of the government.

In a separate development Tuesday, an opposition Web site retracted a charge that former presidential candidate Mir Hossein Mousavi and his wife were secretly moved to a military prison in Tehran last week. Mousavi’s Kaleme Web site said the couple “are currently being held in their house,” not at the Heshmatieh prison in Tehran.

The whereabouts of cleric Mehdi Karroubi, another opposition leader and former presidential candidate, were not immediately clear.

After calls for protests on Feb. 14, Iran’s chief prosecutor said both opposition leaders were placed under unspecified restrictions aimed at isolating them from their supporters.