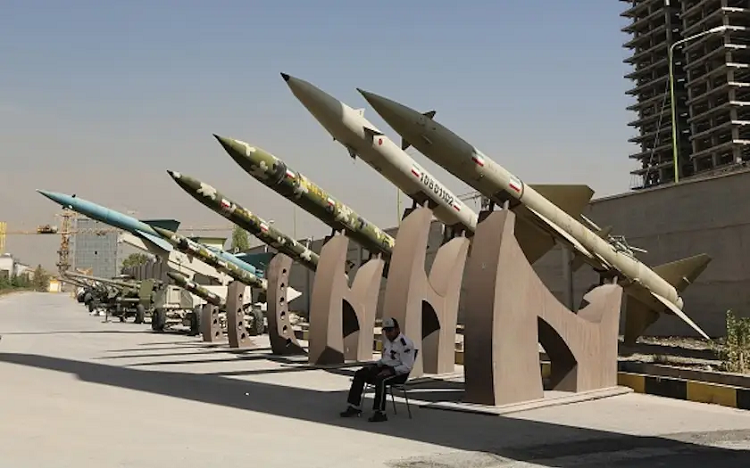 These days, the arms embargo on Iran has become the main topic for issues related to this country. In 2015, the previous administration of the United States led the United Nations Security Council (UNSC) to impose an arms embargo on the Iranian regime according to provisions of the nuclear deal with Iran, formally known as the Joint Comprehensive Plan of Action (JCPOA).

The JCPOA was supposed to neutralize the ayatollahs’ threats to stability and peace in the Middle East. However, the Iranian regime avoided abiding by the international accord despite uncountable economic and political privileges.

For instance, Iran was obligated to destroy the original components of the Arak facility under the nuclear deal. On January 22, 2019, Ali Akbar Salehi, the head of the Atomic Energy Organization of Iran revealed his government had hidden and duped the International Atomic Energy Agency’s inspectors.

“When our team was in the midst of the negotiations, we knew that [the Westerners] would ultimately renege on their promises,” Salehi said in an interview broadcasted on the state-run T.V. Channel Four.

“There are tubes where the fuel goes. We had bought similar tubes, but I could not declare this at the time. Only one person in Iran knew this. We told no one but the top man of the regime [Khamenei],” he added.

Later, on February 9, 2019, Ahmad Khatami, a member of the inner circle of the supreme leader Ali Khamenei, said, “We have the formula for building an atomic bomb,” adding, “We consider nuclear energy to be vital to us,” according to IRNA news agency.

These remarks along with the previous attempts for achieving nuclear weapons since 1986 clearly demonstrate that the mullahs’ regime has always been hiding and continuing to cover the Possible Military Dimensions (PMD) of its nuclear program.

Over the past 40 years, Iranian authorities frequently face public protests against their oppressive rule. The regime, however, has responded to any cry for basic rights and fundamental freedoms with blind violence.

For instance, last November, many citizens in around 200 cities took to the streets to protested the hikes in gasoline prices. But the ayatollahs dispatched the Revolutionary Guard (IRGC) to cities to quell countrywide protests at all the cost. “Do whatever it takes to end the unrest,” Khamenei ordered his forces.

Reports and videos in several areas disclosed that state security forces used helicopters and heavy machineguns to kill protesters. As a result, more than 1,500 protesters were killed by the regime and at least 12,000 were detained.

Shooting Down a Ukrainian Airliner

On January 8, the IRGC’s Aerospace Force shot down the Ukrainian Airline Flight PS752 and killed all 176 passengers on board. After three days of concealment, Amir Ali Hajizadeh, Commander of the IRGC’s Aerospace Force, admitted to the role of his forces in downing the airliner and justified the crime as “human error.” The regime claimed that its forces had mistaken the airplane for a cruise missile. However, the Iranian government still refrains from handing over the block boxes of the downed airplanes to the manufacturer.

Evidence showed that the IRGC’s anti-aircraft system launched two missiles to the airliner, which indicates it was not “a human error,” but it was multiple “human errors.” On the other hand, it is also unclear how IRGC forces tell the difference between a passenger jetliner and a cruise missile, according to the IRGC’s claim. Moreover, how couldn’t they detect the direction of the “cruise missile” while it was directing abroad?

Eventually, the Russian SA-15 air defense system provided to the Iranian regime resulted in the death of 176 Iranians and foreign citizens. It is unimaginable how many innocents may lose their lives by more advanced and sophisticated weapons in IRGC’s hands.

Given Hajizadeh’s admission, many citizens, particularly students, poured into the streets and held protests. Again, the government cruelly responded to the protests. Security forces fired teargas and rubber bullets to quell the public anger. They also arrested many students and sentenced them to years in prison and lashes under the pretext of “assembly and collusion against the national security.”

Notably, in October 2018, IRGC commanders boasted that they had targeted and eliminated bases of the Islamic State of Iraq and Levant (ISIS) in Raqqah with precious missiles. However, videos later showed that IRGC’s “precious” missiles had landed in Kermanshah, western Iran, and damaged people’s properties and livestock.

Planning for More Missile Cities Under the Shadow of the Coronavirus

Additionally, Iranian authorities time and again claimed that they attend to boost the country’s deterrence power. Based on this claim, they have built up many missile cities according to IRGC commanders and footage.

On the other hand, the Iranian government is the main element for destroying regional peace and security. It also extended its malign behavior and terror plots to European soil and the United States. In 2018, persecutors in Belgium, Germany, France, the U.S., Albania, Netherlands, and Romania exposed the Iranian regime’s plots for targeting dissidents in their territories.

Iran’s generous charities for its allies in the Middle East and North Africa raise suspicions over the accuracy of authorities’ claims. For instance, on January 7, Parliament Speaker Ali Larijani said, “We adopted to allocate 200 million euros from the National Development Fund for two months alone to support the IRGC Quds Force, which is responsible for ‘resistance’ in the region.”

In other words, how are Iranian officials ready to spend their money on unnecessary projects while the country is hard hit by the novel coronavirus and the government is crippled to provide the people’s needs. In this context, Tehran’s mayor Pirouz Hanachi rejected the implementation of quarantine measures due to its cost.

“Quarantine measures, such as supplying goods and compensating (businesses, etc.), cannot be implemented in the country and therefore quarantine cannot be fully implemented,” Hanachi said on March 7.

How Iran Would Purchase Weaponry While It Suffers from Severe Economic Problems?

Also, Iranian authorities pursue purchasing sophisticated weaponry while the country is yet threatened by second and third waves of the coronavirus in autumn. “We have no doubt that it will happen and when it will happen. It will definitely happen… in October, November, and December, our concern is very serious,” ISNA news agency quoted Mohammad Reza Shanesaz, the president of the Food and Drug Organization, as saying on April 1.

The Iranian government suffers from massive budget deficits, in addition to other obstacles. “Without money, we cannot run the affairs of the state,” said President Hassan Rouhani on November 12, three days before the gasoline price hikes that ignited the November protests.

Iranian authorities had to raise gasoline prices to compensate for budget deficits. In fact, given the loss of the oil and condensate revenue, the regime put pressure on the society by rationing and raising the price of fuel to run its apparatuses. In addition, the ayatollahs have raised bread prices that directly impact the lives of millions of impoverished citizens. This is happening while millions of people have lost their business or being dismissed due to coronavirus’ consequences.

Therefore, it would better that Iranian officials spend their money on essential supplies to boost the people’s capacity in later waves of the COVID-19 disease rather than planning for building more missile cities. However, according to their disastrous functions in the coronavirus era, i.e. killing 16 million chicks, the people’s hunger and problems are the ayatollahs’ last concerns.

On February 14, 2020, the U.S. Navy managed to seize an Iranian weapons shipment bound for Houthi rebels in Yemen. Iranian weapons smuggling into Yemen proved the ayatollahs’ breach of UNSC resolutions, which obviously prohibited Iran from shipping weapons beyond, as well as supplying weapons to Houthis amid Yemen’s civil war.

The U.S. Navy interdicted 358 Iranian-made missiles + other weapons components on their way to the Houthis in Yemen. This is another example of the world’s largest state sponsor of terror the Islamic Republic of Iran continuing to defy the UN Security Council. pic.twitter.com/vPOaoIpChU

Notably, Houthis had previously admitted to sophisticated attacks on Aramco. However, in both scenarios, whether the Iranian regime directly attacked or implemented it through Houthis, commercial facilities were targeted by Iranian weapons due to Iran is the unilateral sponsorship of Houthis.

Later, on November 25, 2019, Reuters implicitly confirmed the NCRI revelation in a piece titled, “Inside Iran’s plot to attack Saudi Arabia.”

Furthermore, in June 2016, the secretary-general of the Lebanese Hezbollah openly admitted that his group receives weapons and rockets from Iran. “We are open about the fact that Hezbollah’s budget, its income, its expenses, everything it eats and drinks, its weapons, and rockets, are from the Islamic Republic of Iran,” Hezbollah’s official Al Ahed newspaper quoted him as saying.

Reminders:
-Iran provides more than $700 mn/yr to Hezbollah
-Hezbollah chief: “As long as Iran has money, we have money” pic.twitter.com/VcgD3FTLyk

On February 6, 2019, in an interview with the Lebanese Al-Manar T.V. Nasrallah said, “I am willing to go to Iran and bring the Lebanese army air defenses and whatever else it needs in order to become the strongest military in the region.”

Some key takeaways are:

It is necessary to restrict the Iranian regime’s military power, which is likely to harm the international community in addition to the Iranian people. In this respect, the world and especially the permanent members of the UNSC should force Iran to spend its money on the benefit of its people and protect them against the coronavirus.

This matter would save the Middle East from more aggressive ambitions by the ayatollahs. It will also save the lives of many Iranians who are waiting to obtain their fundamental rights in the post-coronavirus era through protests. Therefore, Estonia, as the rotating president of the UNSC has a great responsibility for securing the world and standing along with Iranian citizens for their undeniable rights by extending the Iran arms embargo.