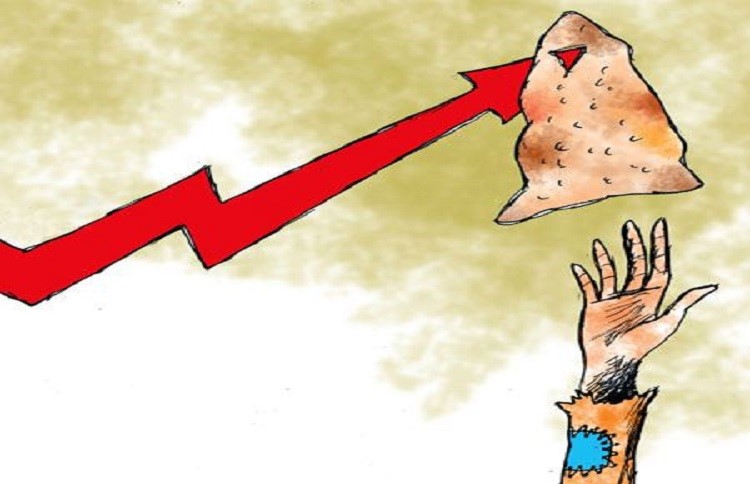 Amid death, poverty, and misery, Iran’s regime is precisely and gradually increasing the price of bread from region to region.

By the examination of various news shows that the relevant agents, with the help of the regime’s well-known method, first analyze the situation with the tactic of ‘confirmation and denial’ and then gradually implement their inhuman intentions.

Miscellaneous news shows that the regime has allowed some of its agents in some provinces and cities, such as Buin Zahra, Masjed Soleiman, Dezful, Khalkhal, and parts of Tehran province, and has effectively increased the price of bread by 40 to 50 percent.

Mir Morsali, head of the Department of Industry, Mines and Trade, said at a meeting of the Khalkhal Flour and Bread Organizing Working Group on Saturday:

“The increase in the price of bread in Khalkhal is in line with the implementation of the new instructions of the Flour and Bread Council of Ardabil province and will be done with a few percent increase and in terms of the weight gain of the bread buns.” (IRNA, 25 April)

However, in some provinces, such as Kermanshah, the relevant agents have denied the price gain of bread, with the difference that by presenting a few reasons, they have prepared the situation for raising the price of bread. Based on this, it is predicted that the new global price of bread will be announced soon.

The state broadcaster IRIB in Kermanshah on 25 April, according to Arvisi, the director-general of the regime’s grain and trade services in the province, wrote:

“This rumor is not true at all, and we do not see any increase in the price of flour and bread.” However, this regime’s element added: “Any decision regarding the pricing of bread is in the area of ​​authority of the working group of the wheat, flour and bread monitoring council of the governorate and any increase by this working group will be announced subsequently,” and so he prepared the people’s mind so that they would not be surprised at the increase in the price of bread in the future.

Regarding the increase of the bread price, the FARS news agency wrote on 29 April: “Given the many economic problems facing the people and the need for government support, what is the justification for the high cost of bread in this situation?”

It warned the government about the consequences of any price hike of bread and wrote: “Does it make difficult and inflammatory decisions that cause people to worry and resent at these times? Like the price hike of gasoline on the night of the birth of the Prophet. Is the holy month of Ramadan, known as the month of helping the needy and the month of mercy, a good time to raise the price of bread?”

Facilities such as granting or deferring water and electricity bills, eliminating or reducing taxes, and free treatment for people with corona, all of which are at least part of the minimum rights for people in an emergency.

Instead, contrary to Rouhani’s claims, patients are now hospitalized with exorbitant sums of money. In addition, it did not increase workers’ wages even to the point of compensating for inflation. The one million Toman charity maneuver also was only offered to the people as a loan.

And now it is trying to increase the price of bread step by step which will add to the poverty of the people and make them more vulnerable, which will have extreme social consequences.

New York Times: A 16-month review by the United...