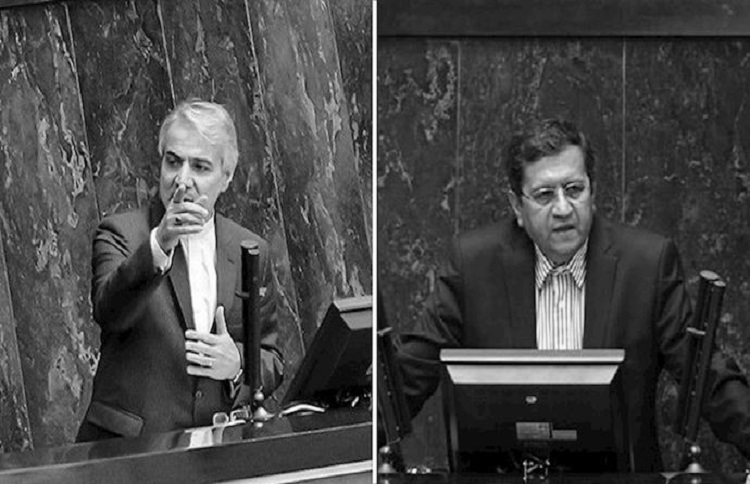 Abdul Nasser Hemmati, the head of Iran’s Central Bank, and Mohammad Baqer Nobakht, the head of government’s program and budget organization, admitted in speeches in parliament on 2 June that the situation of the clerical establishment is difficult given the international pressure or ‘maximum pressure’, and the regime is internationally isolated.

In 2018, we faced very difficult conditions, and in 2019, it can be said that it was one of our most difficult years during the revolution and the sanctions imposed on the Islamic Republic of Iran. They cut off all our banking pores, disrupted all our export activities.

Some friends think that the maximum pressure ends somewhere, we say that this maximum pressure has reached a stage, that will continue, and all our revenue pores are now closed. Many of the countries that claim now to be friends with us, from Korea to various countries, even alongside us, Iraq, they do not allow us to use our money resources, because of US pressure on their banks.

“The oil must be set aside, and taxes, you are aware of the stagnation situation, it is very difficult to run the country in such a situation. You who say we should not use oil, now, fortunately, the situation became so, that we can not use the oil. And about the taxes, you are aware of. In this stagnation situation, you tell me how should we pay the 30 trillion monthly wages of the government’s employees?

“In this valley, we have about 250 trillion tomans from subsidies because of the remark of 14. The situation is becoming such that at minimum 42 trillion tomans of these numbers that the tenth parliament has approved, is not feasible. We in the country are now facing the conditions that are the result of sanctions.”

Other facts about the authorities’ bad situation

On 26 May Hamid Kordbacheh, head of the state-run insurance research institute said the economic downturn is likely to deepen this year.

He added: “Very pessimistic forecasts show that 3 to 4 percent will be added to the negative growth (of the economy). This will also affect the insurance industry.”

The customs statistics of Iran’s government show that the country’s non-oil exports in the first two months of 2020 fell by 49 percent to $4.3 billion, compared to $8.4 billion in the same period last year.

Azad University news agency, quoting a government spokesman, Ruhollah Latifi, on 1 June, wrote: “The share of exports from the total announced numbers is $4,3 billion and imports are $5,41 billion.

“Also, the country’s imports have fallen from $6.76 billion in the first two months of last year to about $5 billion in April and May this year.

“Thus, while Iran’s non-oil trade balance in the first two months of last year was about $1.65 billion in favor of Iran, the index in the same period this year has lost about half a billion dollars to the detriment of Iran.”

Meanwhile, international statistics show that the Iranian regime’s oil exports have fallen from 1.5 million barrels per day in the first two months of last year to less than 200,000 barrels in the same period this year, half of which went to China and the other half to Syria.

“The Iranian regime has continued its nuclear brinkmanship by expanding proliferation-sensitive activities. These escalatory actions are unacceptable and I cannot justify renewing the waiver for these JCPOA-related activities as a result.”

In his latest tweet, he said: “We remain focused on addressing Iran’s destabilizing behavior in Iraq and the region.”

In conclusion, this shows that the regime’s fear about its future and more severe pressures is accurate, and this time the international community will not decrease its pressure and give the regime new breathing space.

The FATF Crisis and the Incurable Pain of Iran’s Government

One major point of contention in the factional feuding...