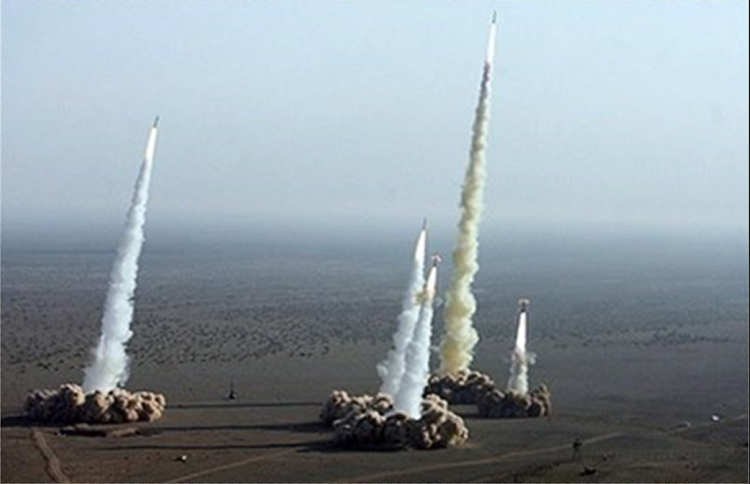 Iranian officials’ aggressive behavior and remarks have proven in word and deed the importance of extending the UN arms embargo as the Security Council approaches its final decision on the matter.

Since the beginning of the Islamic Republic in 1979, the Middle East and the world entered a new phase of tensions and chaos. Ruhollah Khomeini, the founder of the religious system in Iran, built his government on hostility against the people of Iran and other nations.

In his book ‘Islamic State,’ which Khomeini had written before taking power, he openly manifested his intention to establish a religious empire. He saw Shiite people in different countries as his potential infantry. In this respect, Khomeini and his allies began to form proxies in Iraq, Lebanon, and the Gulf States, such as the Kingdom of Bahrain, Kuwait, and Saudi Arabia.

Since then, the region has been plunged into a quagmire of bloodshed and human crises. For many years, Tehran’s terror machine claimed the lives of uncountable people across the globe. In 1983, the ayatollahs’ proxies bombed foreign embassies in Kuwait. Abu Mahdi al-Muhandis, killed on January 3, orchestrated the operation and then fled to Iran.

In 1986, Tehran recruited Lebanese terrorists to exert pressure on the French government. From December 7, 1985, to September 17, 1986, Iran-backed terrorists under the name of “Committee for Solidarity with Arab and Middle Eastern Political Prisoners (CSPPA)” staged 12 bomb attacks in Paris and its metropolitan areas. The ayatollahs pursued releasing their agents who were previously detained for assassinating dissidents in France and jeopardizing French authorities to expel the main opposition group from their soil.

On July 31, 1987, in Mecca, Iran-backed fundamentalists intended to turn religious ritual to political stunt leading to a bloody clash between “pilgrims” and security forces. The event contributed to the death of more than 400 people and thousands of injuries. Khomeini’s thugs were armed with knives and clubs, while pilgrims should have been unarmed during the “Haj” ceremony.

Also, since 2003, the ayatollahs frequently targeted coalition troops under the U.S. command in Iraq, contributing to the death of at least 4,000 soldiers while Iran was ostensibly not engaged in the war. Furthermore, Iran’s Revolutionary Guard Corps (IRGC) plays a leading role in the ongoing domestic conflicts in Syria and Yemen.

Since the beginning of the Syrian people’s protests in 2011, the IRGC Quds Force (IRGC-QF) dynamically implicated in the crackdown on protesters to maintain the ayatollahs’ regional ally in power. Bloody suppression in Syria has resulted in more than 700,000 deaths and millions of asylums so far. Also, Tehran’s expansionist policies in support of Houthi rebels in Yemen pushed the country into a prolonged domestic war and enormous human disasters at the expense of Yemenis.

Additionally, the illegal government of Iran, which has been challenged by widespread protests in recent years, pursues to intimidate its own people by showing military force and tyrannical measures. In this respect, Iranian authorities allocated a considerable share of the country’s annual budget to advance their oppressive apparatuses rather than boost their health and hygienic departments.

Also, as they pleaded the International Monetary Funds for a $5-billion loan to contain the coronavirus, they increased the price of essential supplies, raised taxes and removed a large part of subsidies, and donated the country’s wealth to their extremist proxies in the Middle East. However, they simultaneously bid to lift a UN arms embargo to be able to squander more national assets on unnecessary weaponry systems.

This is while the Iranian people are the first victims of the ayatollahs’ empowerment. In November 2019, Iran’s leaders bluntly showed their readiness to use intensive force to suppress emptyhanded demonstrators. They employed helicopters, tanks, and heavy machineguns to silence people who had merely raised their voices for their economic grievances.

Moreover, following the forging of the Iran nuclear deal, formally known as the Joint Comprehensive Plan of Action (JCPOA), international negotiators upheld arms embargo to neutralize the Iranian government’s malign behaviors. However, this goal has never been achieved, and Iranian officials proudly insist on their aggressive and provocative activities.

Therefore, pleasing the ayatollahs while they lack legitimacy and seek to fasten their rule by tightening the noose on the people and terrorizing their neighbors is a wrong step. The contribution of economic concessions in a bid to normalize and civilize outdated rulers in Iran is in favor of neither Iranian citizens, who struggle for fundamental freedoms and civil rights, nor the peace and stability in the region and across the globe. In this respect, Iranians reject boosting the oppressive government through economic incentives, let alone granting them access to weapons.

Instead, the people of Iran expect the international community, particularly the UN Security Council, to hold Iranian authorities accountable for their human rights violations, such as killing at least 1,500 peaceful protesters on November 15 and 16, 2019. The international judicial bodies like the Hague Tribunal should launch impartial investigations on the ayatollahs’ crimes against their citizens as well as the people of Syria, Iraq, Yemen, Lebanon, Afghanistan, etc.

Bloomberg: Iran may be less likely to halt its nuclear...

New York Times: The mother of Amir Hekmati, an American...