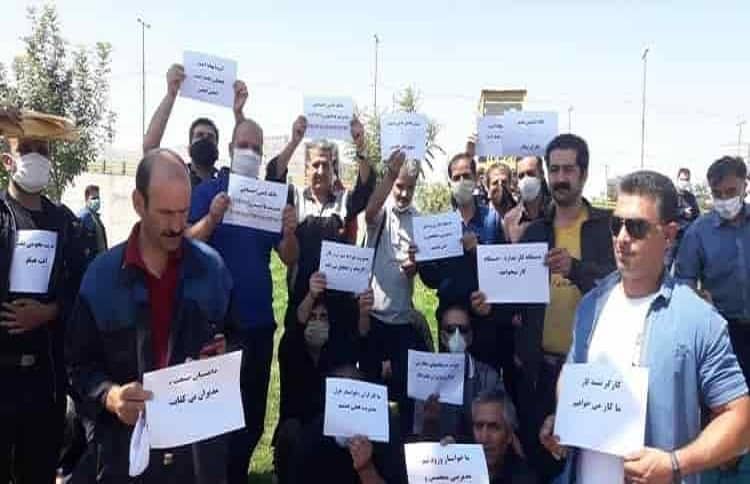 One of the characteristics of the final phase of Iran’s theocratic regime is the joining of the Iranian oil workers to protest and strike, as a sign of a serious change in Iran.

Regardless of the size of the strike, the weight of the oil and energy workers’ strike is very heavy for a government which is involved in many crises, which has tried to use all its power to prevent it from continuing, because oil and petrochemicals are the sources of the dictator’s existence, while Iran’s economy is a one-based economy mostly dependent on oil.

A desert of production and an ocean of liquidity

The situation in all aspects of socio-economic and political is changing with increasing speed against the Iranian government. Even the regime’s President who is now famous for distorting the real facts has recently spoken of “very difficult conditions” and “more difficult than war” (Iran-Iraq war) and in every interview, he is justifying the crushing of people’s bones under the extreme economic pressures: “On the battlefield, of course, there are injuries and martyrdom, and it has its own characteristics.”

The economic stagnation of the Rouhani government is such that it has been announced that the government and the program and budget organization no longer regulate the country’s budget and, unlike every year, do not submit the budget bill to the parliament. Iran’s parliament speaker Mohamad Bagher Qalibaf summed up the economic situation in a short phrase: “Production desert and ocean of liquidity”.

Society on the verge of explosion

Socially, poverty has disrupted the structure of Iranian society, meaning that the middle class has disappeared and fallen below the poverty line, and according to Rouhani himself, 60 million people are eligible for subsidies, and society is on the verge of exploding.

These days we are witnessing a continuous and growing strike of workers, especially in the oil industry, and the regime has not been able to end it, despite using all methods of intimidation and lure. The government’s fear, in particular, is that the strike could spread not only to other refineries and various sectors of the oil industry but also to other sectors of labor and other sections of society.

The state-run daily on this issue warned: “18 million labors should be heard. If the official did not listen to the labors or try to impute their movements outside and enemy, they will face more costly raptures.”

War of interests inside the government’s reign

Apparently, this refined parliament which is now mostly in the hands of the Supreme Leader Ali Khamenei’s faction has become one of the centers of the crisis, its war with the Rouhani government has escalated, and there are severe wars and disputes inside the parliament self. For example, after the rejection of Rouhani’s proposed minister for the Ministry of Industry, Mine and Trade (MIMT), the parliament summoned six ministers from Rouhani’s cabinet, and there is talk of the trial of some former and subsequent ministers and even the impeachment of Rouhani himself.

Inside the parliament, a dispute arose between Mostafa Mirsalim and Qalibaf. Following Mirsalim’s insistence on prosecuting Qalibaf for corruption and bribery, Qalibaf also sued Mirsalim for defamation, and the director-general of public relations of the parliament wrote to the judiciary: “This time, there should be no delay in dealing with the law.”

Lebanon another scene of Tehran’s defeat

Few doubts that the social storm that followed the terrible explosion in Lebanon is aimed at overthrowing Hezbollah’s hegemonic rule in that country. In addition, developments in Iraq and Syria are well underway, and the growing US sanctions and the consensus that is taking shape in the region and the world, blocking Tehran’s political breathing space like its blocked economy.

The corona has also affected the lungs of the government

What is increasing these all-encompassing crises is the explosive spread of the coronavirus because of the government’s carelessness. The government is still trying to use the coronavirus as a lever to take down the society and block any uprising, and it, therefore, insists on holding Muharram ceremonies “at all costs.” A very heavy and horrible price that gives everyone goosebumps, but will the regime be able to survive this wave of death? Despite all these efforts, it seems that the lungs of the government are also involved with the coronavirus and its airway is blocked.

It is in this atmosphere that the warnings of government experts begin, but they generally express frustration at finding any solution. Admitting that there is no solution in the current economic structure to improve the economic conditions of the people and moderate the explosive atmosphere, the daily Siyasat-e Rooz wrote: “If all economic and political sanctions on Iran are lifted tomorrow morning, there will be no change and opening in the country’s economy and people’s lives.”

Washington Post: The hard-line, working-class mayor of Tehran will...