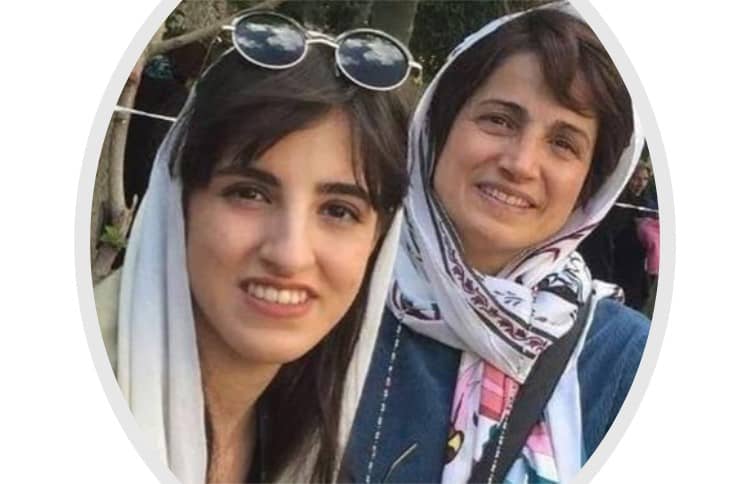 The daughter of an Iranian political prisoner has been arrested on vague charges in order to put pressure on her mother; the Iranian human rights lawyer Nasrin Sotoudeh, who is already on a hunger strike in Evin Prison.

Mehraveh Khandan, 20, was arrested in a raid on her home at 11 am on Monday; taken by five Judiciary agents to the Security Courthouse of Evin without explanation.

Khandan was temporarily released on bail after a few hours, but, this is not the first time she is being subjected to harassment by the regime. She has been banned from leaving the country since she was 12, prevented from visiting her mother under the guise of the misogynous mal-veiling law, and harassed and threatened by Prison authorities when visiting her mother.

On September 16, 2018, Khandan went to visit her mother, but instead of being allowed to see her mother, she was called before the director of the visiting hall and told to “observe her hijab” or she wouldn’t be allowed in, even though she was dressed the same as on previous occasions.

Then, Sotoudeh was told that she was not allowed to receive visitors unless she was fully covered, so in protest, she gave up her family visits; refusing to sign a written pledge that she would wear a veil that only showed her face and hands.

Khandan said: “After waiting in the visitation hall for half an hour, (my mother’s) cellmates told me that when she was asked to sign a pledge to fully observe the hijab, she objected and then protested by refusing to go to visitation, saying that she won’t be making phone calls, either.”

Sotoudeh went on a hunger strike on August 11 to protest prison authorities’ failure to respond to demands by political prisoners or address the dire conditions in prison during the coronavirus outbreak. She is demanding the release of all political prisoners.

It is believed that therefore her daughter was arrested; to put pressure on Sotoudeh to end her hunger strike.

Sotoudeh’s husband, Reza Khandan, was arrested in September 2018 and jailed for several months; shortly after Sotoudeh went on a hunger strike.

Sotoudeh was first arrested on June 13, 2018, and has been held on the women’s ward of Evin Prison ever since, charged with “collusion against national security”, “dissemination of falsities”, “distortion of public opinion”, and “insulting the state officials”. She was sentenced to 38 years in prison and 148 lashes.

The Systematic Trafficking of Iranian Girls

Wall Street Journal: The Bush administration said it has...