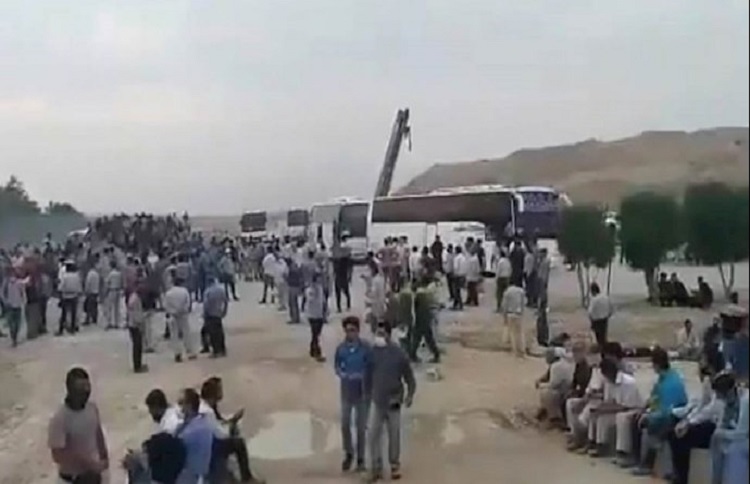 Iran has been besieged by protests from Iranian workers over the past week, showing that the regime is unpopular in all sectors.

Haft Tappeh Sugarcane Company workers continued their protest rally outside the Shush governorate for the 73rd consecutive day on Wednesday.

Many repressive security and police agents were dispatched to the scene to suppress the workers’ legal and peaceful gathering, but still, the protesters said they would continue their protests until their demands are met. The demands are:

On Tuesday, relatives of those killed during the Revolutionary Guards (IRGC) shootdown of the Ukrainian International Airlines flight PS752 gathered outside the Ukrainian embassy in Tehran to demand a meeting with the Ukrainian ambassador. They carried photos of their deceased loved ones.

The IRGC shot down the civilian plane in January with two surface-to-air missiles, killing all 176 passengers and crew on board.

Also on Tuesday, Iran’s oil, gas, petrochemicals, and power plant workers continued their strike for the 25th day in a row.

While contract teachers held a rally outside the parliament to demands answers to their demands, including permanent contracts and insurances.

On Monday, residents of Dobb-e Hardan village held a protest over the drinking water shortage and demanded that water tankers be sent.

One protester said: “According to the officials’ promise, daily water tankers were supposed to be sent to the village until the water supplying project was finalized. However, there has been no such measure. The village has a population of 2,000 people and thirst during the excruciating summer heat has made life very difficult. And no one knows when the water supply project will come to an end.”

While on Sunday, railway workers in Varamin, Pishva, and Garmsar, all in Tehran province, have protested the fact that their wages and insurance premiums have been delayed with a gathering in their workplace, the Railway Service & Technical Engineering Company, also known as the Traverse Company.

When the company officials refused to respond and were negligent, the workers gathered on the rail tracks and stopped the trains. They vowed to continue their protest using a variety of methods until their demands are met.

Iran is playing a growing role in Iraq economy

New York Times: While the Bush administration works to...