Iran: Trump Pulls out of the Nuclear Deal 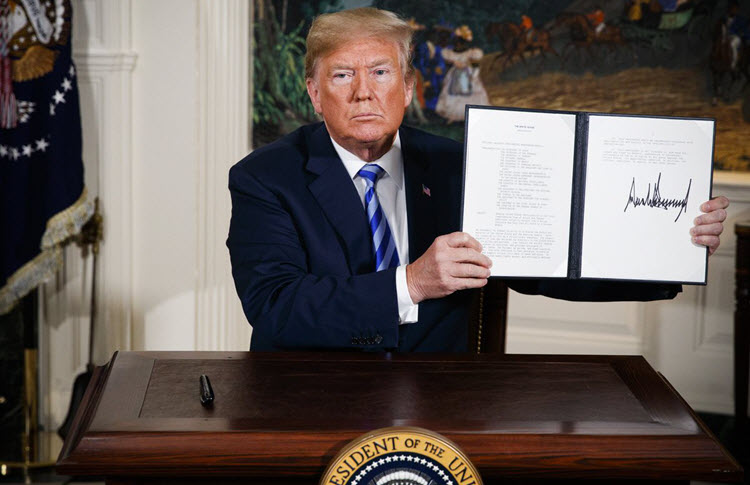 London, 9 May – Despite pleas from the European signatories of the deal, US President Donald Trump announced yesterday that the United States will withdraw from the 2015 Iran nuclear deal. Many are saying that this will show the United States as being a bad player in future agreements because it cannot keep its word.

However, all you had to do was listen to Trump’s speech to understand why it is impossible for the United States to be part of the deal. He reminded us that Iran is the leading state sponsor of terrorism that fuels conflicts across the region, supports terrorist militias and proxy groups and exports missiles.

American embassies have been bombed. US military installations have been targeted. American servicemen and servicewomen have been killed, captured, tortured and imprisoned by Iran. Furthermore, Iran is funding all this by plundering the nation’s wealth, taking away from the people who deserve it.

Trump announced that instead of protecting the United States, the deal “allowed Iran to continue enriching uranium and, over time, reach the brink of a nuclear breakout”. He said: “In other words, at the point when the United States had maximum leverage, this disastrous deal gave this government—and it’s a system of great terror—many billions of dollars, some of it in actual cash. A great embarrassment to me as a citizen and to all citizens of the United States.”

Obama let Iran dictate the terms of the lenient deal that Obama himself knew was weak. He did not submit the deal to Congress because it is likely that he would not get the approval that was needed.

It is uncertain how things will move forward since the announcement yesterday, but some experts believe that Iran, despite its threats, wants the deal to be renegotiated rather than scrapped. The main motivation would of course be economic.

The Iranian economy is a disaster, even with the sanctions relief in place. The economic troubles are a huge source of conflict between the ruling mullahs and the people and the country’s currency hit an all-time low against the dollar.

In fact, the popular unrest in Iran is a hugely destabilising factor for the leadership of the country. At the end of last year, people took to the streets across more than a hundred cities to call for regime change and to hold anti-government demonstrations. The people have called for the mullahs to leave Syria and prioritise domestic issues.

It boils down to a simple choice between two options for Tehran. Does it want to work towards recovering the economy and opening the country up to investment and huge opportunities? Or, does it want to continue with its pursuit of a nuclear weapon.

This option would not have been available to Iran if he had listened to his European allies and continued certifying the deals. Iran was having its cake and eating it, so to speak. It was acting as it pleased, taking all the benefits of the nuclear deal and not being held responsible. Appeasement has well and truly ended.

‘No reason’ to cede on 20% enriched uranium: Iran

AFP: Tehran has "no reason" to suspend its enrichment...