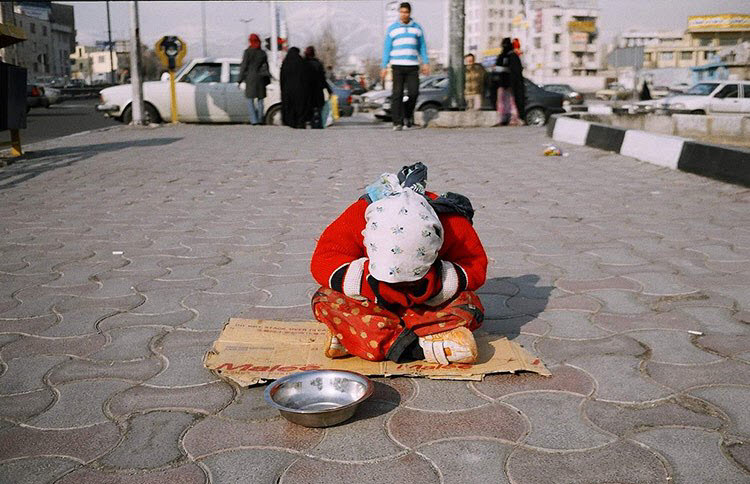 This issue has been largely ignored by Islamic Republic officials, who don’t wish to speak to the results of “absolute” or “extreme” poverty, which is not just an adjective describing the severity of the situation — it has a defined meaning, as noted in a report published by the United Nations in 1995. “Absolute poverty is a condition characterized by severe deprivation of basic human needs, including food, safe drinking water, sanitation facilities, health, shelter, education and information. It depends not only on income but also on access to social services.”

According to a measurable standard set by the World Bank, extreme poverty means attempting to live on less than $1.90 a day.

In Iran, there has been a rapid increase in the number of people living in absolute poverty. This is due to the huge hike in inflation seen over the last two years. And it is causing a wide range of social problems in the country, from drug addiction and divorce, to robbery and murder.

The southeastern province of Sistan and Baluchistan, on the border of Afghanistan and Pakistan, suffers from a range of problems including water shortages. It houses the largest population of the country who live in absolute poverty. The report alleges that 38.31 percent of the population of Sistan and Baluchistan, or around 1.232 million people, live in absolute poverty.

Its neighbor to the west, Kerman, has 32.90 percent of the population, or around 1.311 million people, living in absolute poverty.

In the northeastern province of Golestan, 30.68 percent, or some 646,000 people live in absolute poverty.

The most important religious city in Iran, Qom, has 29.96 percent of the population, or 476,000 people, living in a state of extreme poverty.

Religion seems to be a factor for for the extreme poverty of these provinces.

Much of the population is Sunni Muslim in the provinces of Sistan and Baluchistan, and Golestan. The report by the Parliament’s Research Center makes it official that poverty and margin-dwelling occurs in Sunni-majority regions.

Qom is the base for Iranian Shia seminaries, and home to many religious authorities and ayatollahs. Thousands of seminary students from across the country also live there, often in poor conditions. Qom was located in Tehran province until 1995, but under orders from Supreme Leader Ali Khamenei, Qom became part of a separate province. The area has a desert-like climate and inadequate infrastructure, and hasn’t the resources to address its problems.

A large number of destitute Afghan refugees has worsened the situation in Kerman, a province that also has poor infrastructure and little employment opportunity. The neighboring province of Hormozgan is home to a large population of Sunnis, and is the fifth poorest province in Iran. The parliamentary report states that 22.08 percent of the population of Hormozgan, or 496,000 people, live in absolute poverty.

The report used statistics from 2016, so its concerning that poverty has worsened in the last two or three years. The newspaper Donya-e Eghtesad (“The World of Economy”) has attempted to bring some of the figures set out in the Research Center’s report up to date, and have concluded that inflation was 53 percent higher in the Iranian calendar month of Aban 1397 (October 23 – November 21, 2018) compared to the same month in 2016. Using this information, the newspaper claims that if adjusting the poverty line for inflation will make the poverty line for a family of four in the city of Tehran 3.18 million tomans ($757) per month. As for the poverty line for a rural household in the provinces of Tehran and Alborz, it is nearly 1.8 million tomans ($429) per month. For deprived villages such as those in the provinces of Sistan and Baluchistan, it is 831,000 tomans ($198).

According to an article published by Track Persia, a platform run by dedicated analysts who spend much of their time researching the Middle East, if inflation has hit 53 percent over a period of just two years, it is clear that absolute poverty has Iran in its grip.

The next president’s next war

Washington Times: With both parties' U.S. presidential and vice...