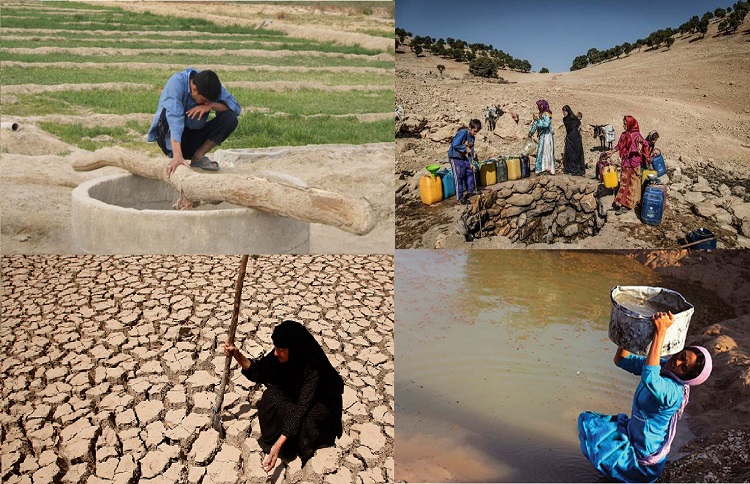 In Iran lakes, wetlands and forests are fast disappearings. The dirty air restricts the quality of life. Sandstorms occur; entire tracts of land become barren desert landscapes. The water shortage is due to both government mismanagement and climate change.

Water consumption in Iran is enormously high despite the shortage. The tight labor market offers farmers no alternatives. Illegal wells exacerbate the problem.

Iran recently stopped importing wheat from abroad. The water shortage is making it harder for Iran to avoid importing food. The wheat grown in Iran consumes one-third of the water from reservoirs and dams per year. Around 92 percent of the water goes into Iran’s agriculture every year.

Iran is a country that has always consisted largely of desert or semi-desert land. Of its total area of ​​165 million hectares, only 50 million hectares are agricultural and only 18 million hectares are actually used. Water scarcity and the world’s highest soil erosion rate are worsening the situation. Here, climate change and a drought that has lasted for decades are among the causes, as well as obsolete technology in irrigation – 90 percent of the acreage must be irrigated. Added to this is low awareness of the problem and waste of water at low prices by the authorities. Iran, with its population of 1 percent of the world’s population, has only 0.3 percent of the world’s freshwater resources available. Yet, due to the local weather conditions, on average, residents of large Iranian cities consume 160 liters of water a day (though people in Iran’s impoverished provinces don’t have basic water resources). For comparison, in Germany, this figure is 125 liters. Iran’s population is growing and industrial production is being expanded, all of which increase the need for water while resources are falling.

The bad developments in the water industry have existed for at least 50 years and a rethinking is too slow. So far too many dams were built, about 600 since the revolution, mainly by the Revolutionary Guards (IRGC), which led to the drying up of wetlands.

One controversy is over the promotion of wheat production. Its combination with irrigation methods, whose efficiency is only 45 percent (the global average is 75 percent) is particularly devastating. The efficiency has already been increased by 10 percent in the last ten years.

Controversial is also the settlement of very water-intensive industries in areas with a particular lack of water. Here, the government has tried to create jobs without paying attention to this problem. On the other hand, they control by, for example, cooling power plants with treated wastewater rather than with water from deep wells. But the implementation of such projects takes time and costs money.

Twelve out of 31 Iranian provinces are threatened with complete dehydration in a few years’ time. Ninety percent of the population is in areas of high or very high water stress, putting Iran at greater risk than any other country in the region of North Africa. So far the country-dwellers and rural areas have been seriously affected by the lack of water. In some regions, large parts of the fields or plantations have had to be abandoned. This year, the government banned the cultivation of water-intensive crops in some areas for the first time.

There are also protests over and over again when farmers revolt against the fact that in their view the scarce resource is unjustly distributed and redirected by Iran’s government.

Reuters: Major powers are considering a joint meeting with...

These days, governments across the globe are doing their...