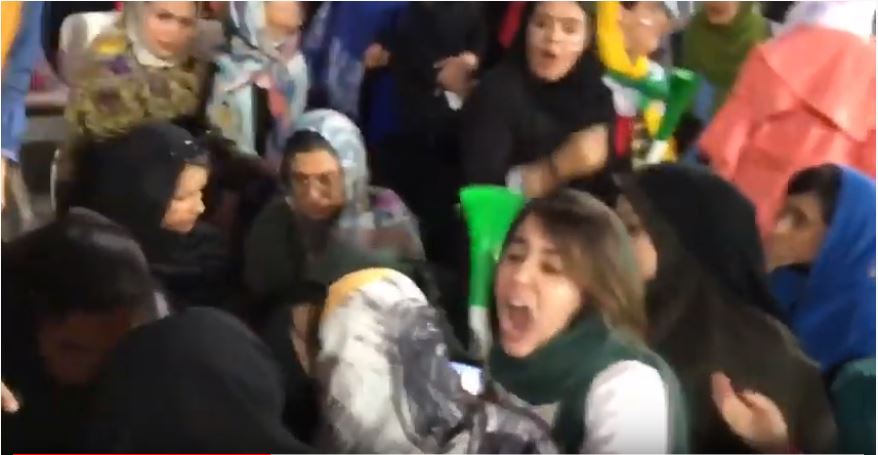 After roughly 3,500 women were admitted to Tehran’s Azadi Stadium for Thursday’s World Cup qualifier between the Iranian and Cambodian national teams, many international news outlets reported upon the “end” of the Iranian regime’s nearly 40-year ban on female attendance at male sporting events.

But when examined more closely, the reality of the situation is much more complicated than that.

For one thing, the more optimistic reports fail to take into account that this is not the first time that women have been admitted to stadiums on a limited basis while the ban still remained in effect. At a friendly match attended by FIFA President Gianni Infantino last November, a select group of women was given tickets for special, female-only seating, in the interest of demonstrating progress toward compliance with the global soccer authority’s demand for non-discrimination in ticketing at Iranian events. Accordingly, Infantino personally expressed optimism about the prospective end of the ban, and yet full enforcement resumed immediately afterward.

The experience of this match and the subsequent crackdown influence the expectations of many Iranian women who sought to exploit the opening of Azadi Stadium on Thursday. Some emphasized that the benefits of that opening were likely to be disproportionately enjoyed by upper class and socially well-connected officials. Others pointed out that the Open Stadiums movement will not achieve its goal until the ban is lifted across the board. Even if the ban is not tightened once again in advance of future World Cup qualifiers, the new rules are expected to apply only to matches involving the Iranian national team, not league matches.

But there is no guarantee that the Iranian soccer federation will stand by its commitment to female ticketing in any subsequent matches unless international pressure remains strong. And this may also be in doubt since the pressure leading up to Thursday’s match was amplified by unusual circumstances.

FIFA had previously set a deadline for Iran to show definite progress toward compliance with the international body’s rules against discriminatory ticketing. But this deadline passed without incident, and also without any consequences such as a ban from international competition. But the organization issued a new statement against the backdrop of vigorous protests on Iranian social media, following the death of Sahar Khodayari, the “Blue Girl” who set herself on fire outside a courtroom after being threatened with upwards of six month’ jail time for trying to attend a soccer match while disguised as a man.

Although last months’ FIFA statement still shied away from explicitly threatening a ban, it did bring seemingly bring the issue enough international attention to shame the Islamic Republic into relaxing its misogynistic policy. But among government officials and powerful Iranian institutions, the motivation for compliance appeared to be the threat of further public exposure. This may not have been evident from the relaxation of the ban itself, but it was evident from the steps taken to limit public awareness of the supposed women’s rights milestone.

For instance, the state media outlet IRIB declared in advance of Thursday’s match that it would not broadcast the World Cup qualifier if there was any chance that female photographers would be visible alongside the field. This threat contributed to a situation in which female photographers and journalists were strictly confined to the women’s seating area. In fact, persons familiar with the matter indicated that female journalists were actually more isolated from their male counterparts than they normally would be at matches with only male spectators. And this was apparently easy for authorities to accomplish, given that the women’s section was fully fenced in and guarded by as many as 150 specially trained female police units.

These “security” measures were promised in advance by General Hasan Karami of the National Police Special Units, who was partially responsible for implementing the relaxation of the ban, even though he had previously spoken against that measure. After stating that Iranian society “is run on principles and morality,” Karami said that a female presence at male sporting events would violate “customs and traditions” and would “perpetuate the disorder.” And in describing the police deployments and security fencing that his institution put into place, he expressed stated, “We have taken the necessary precaution for controlling women.”

This goes to show that contrary to the optimism expressed by FIFA and various Western media, the full lifting of the stadium ban depends on more than just the compliance of the Iranian soccer federation or the Sports Ministry. Their past responses to FIFA’s demands suggest that they may generally be amenable to a change of rules. But even if this is the case, they will continue to face push-back from security forces, state media, the Islamic Revolutionary Guard Corps, and powerful figures in the regime’s hierarchy, up to and including Supreme Leader Ali Khamenei.

Khamenei has taken a leading role in promoting further restrictions on the rights and the role of women in Iranian society. Recent years have seen expanded enforcement of the country’s forced veiling laws, as well as new restrictions on women,  bicycling, performing in public, working alongside men, and so on. Under these conditions, it is clear that it will take more than a single match, played in the wake of an attention-grabbing tragedy, before the ban on women in stadiums can be declared “ended.”

Reuters: Iran's president made clear in comments published on...