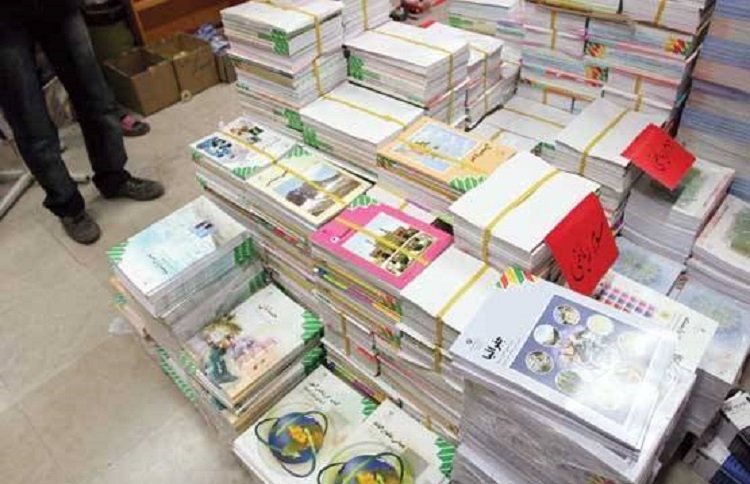 Instead of answering the question of why students were left without a book for 20 days at the start of the school year, Ahmadreza Amini, the Director-General of Supervision and Distribution of Educational Materials in Iran, first outlined the process of textbook printing, and finally cited several factors, while hiding the main cause of this situation which is corruption by Iranian officials.

He accused students’ parents and said:  “In spite of the four weeks since the reopening of schools, 50,000 people have still not registered to receive books in the whole country.” (state-run Arman daily, 15 October 2019)

What this means is that the authorities did not know how many textbooks they had to prepare because of the lack of timely knowledge of the student statistics.

He attributed another drawback to some schools’ inaccuracies about the system of remittances, which has led to “a number of textbooks landing on the free market”.

This government official assembled all these reasons together to cover up the main cause, Iran analysts say. While he pointed out that many of the schoolbooks have been sold on the black market, he did not explain how and by whom this has happened.

The main reason for the lack of textbooks in Iranian schools

Asghar Massoudi, Iranian MP, stated that “the problem of paper supply should have been solved long ago by the government” (state-run Resalat daily, 29 August 2019). His comments reveal a part of the reality and show that the main cause is neither “timely registration” nor a shortage of paper in the “distribution system”.

Ali Zu Elm, the deputy minister and head of the research and planning organization, explicitly admitted this shortcoming: “Until now we are four months behind our schedule plan for paper supply and a long time has been passed, but our concerns have not been resolved yet … We need 45,000 tons of paper, but only 3,000 tons have been supplied”. (Resalat, 1 September)

Meanwhile, Reza Rahmani, the Iranian minister of industry, said: “The currency reserved for textbooks and newspapers is the official 42000-rial exchange rate … [and] that has not changed.” Rahmani wants to say that there is a reason for the lack of paper. So, the main cause is to be found elsewhere.

The question is why, despite the allocation of the official 42000 rials currency for paper, should people go to the black market for their children’s textbooks?

Another state-run media acknowledged the existence of a black market for schoolbooks, where parents go to find their children’s schoolbooks at a price that is four times higher than the original price, the market that is formed at the government’s hands.

“This black market, like other black markets, is speaking about the violation of some government officials”. (Mashreq News, 15 October 2019)

Hussein Ghazisadeh Hashemi, Iranian MP, also admitted that “corruption and mafia behavior is the reason for the increase in paper prices … to the paper accrued the official 42000 rials currency, but it has impressive prices, and influential people had huge profits, from this turbulent situation.” (Khabar Fori, 16 October 2019)

And Ai Zu Elm said: “Sometimes it is heard that some of the books that should have been sent to the school from the warehouse of the region and must be distributed in the school have gone to the open market.” (ISNA news agency, 12 October 2019)

Reuters: Iran has said nothing so far to suggest...