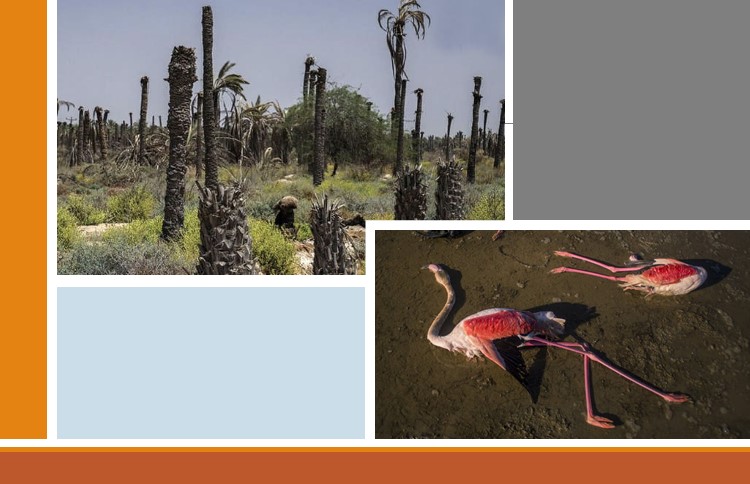 In the past week, two bad news about the destruction of Iranian nature has been published. One in the north area and another in the south. In the north, the news of the death of more than 12,000 migratory birds is suspected, and in the south the risk of the death of one million palm trees.

Miankaleh Wetland is in the southeastern part of the Caspian Sea, twelve kilometers north of the city of Behshahr in Mazandaran Province.

About 12,000 migratory birds have died in the wetland from 22 January to 31 January. Most of these birds are flamingos, ducks, and coots. Government officials have announced that they will announce the cause of these suspicious deaths in a week but like any other issue in this regime such as the hit of the Ukrainian airplane, who believes them?

Although the veterinary agency has identified the primary cause of migratory bird deaths as botulism, a group of environmental activists sent samples of dead birds to an independent laboratory in response, but the lab destroyed the carcasses and said it would not investigate further.

Shahabuddin Montazemi, director-general of the Bureau of Wildlife Management, said that no new statistics had been obtained due to the adverse weather conditions in Miankaleh: “Many migratory birds have died in shallow areas where oxygen depletion is likely. So, it can even be said that not getting water into the wetland can create anaerobic conditions and produce botulism.”

According to environmental officials, the death of thousands of birds due to botulism poison is a rare issue that needs to be investigated.

Some environmental activists are suspicious of reported reasons. Soheil Oladzad, an environmental activist and expert in Mazandaran, says: “They want to end the story by saying that the problem is the lagoon self. Even when we wanted to get help from the scientific and academic institutions of the country as neutral people, to clarify the deadly aspects of bird death, they didn’t cooperate with us. We sent four birds with great difficulty to miles away from Mazandaran, but the lab did not cooperate for fear of the Veterinary Office and the Environment Agency to find out why the birds died.”

He says they were forced to do so because of distrust: “The veterinary organization has to give scientific opinions, but its reactions are emotional, and its opinions are unscientific. They say botulism is the cause of bird death, but one must ask why botulism is activated in the cold winter? In addition, botulism requires algae, while there were no algae in the centers where the deaths of migratory birds occurred. On the other hand, all these birds have been bleeding. With this evidence, many veterinarians have concluded as to the cause of this widespread death.

Oladzad quotes a post on the Provincial Environmental Veterinary Instagram page that said the bird was declared a “poultry cholera” and had subsequently deleted the post.

However, field surveys of this environmental activist indicate that pollutant sources are abundant in the Miankaleh wetland, including the Behshahr Compost Plant, which is based within one and a half to two kilometers of the wetland.

Two years after the inauguration of the factory and the slogans that they have solved the problem of garbage in the eastern province, it did not work and now the garbage is dumped in the area and its leachate flows into a canal leading directly to the wetland, just where the birds have died.

On the other hand, he said, the sewage north of the cities of Neka, Behshahr, Galoughah, Bandar Gaz and Turkmen port and all their villages flows into the Miankaleh lagoon and encloses industrial towns, heavy industries, and slaughterhouses that have surrounded the Miankaleh lagoon.

On the other hand, the existence of Sadra Shipbuilding, North Drilling Co., Nafa Co., and canning companies have also surrounded the lagoon and has also been implicated in the cause of pollution in the Miankaleh lagoon.

If the effluent and leachate of each of these industries drain into the wetland, it can create algal blooms, which in turn causes cholera and warm water, as well as the development of botulism.

Something is wrong here!

Ali Kashmiri, an animal rights activist who was with the group trying to send carcass samples to independent centers, says: “After talking to the centers, they sent us samples from Miankaleh last week; the birds were lost on Wednesday and reached me on Thursday. But as the lab agreed to do examinations, they withdrew.”

According to him, while the reference lab had to inform the owner while destroying the sample, they destroyed the carcass without informing: “It was illegal, and they broke their obligations by destroying the sample. Yesterday morning when we asked about the reason for the destruction, they said that it had tissue corruption and was not capable of testing. In response, they said they would no longer do any examinations.” From Kashmiri’s viewpoint, there is a hidden fear in this event, and something is wrong there.

Destruction of a vast area of palm orchards

But another bad news in from the south of Iran the Arvandkenar section, 45 km south of Abadan, opposite the Iraqi city of Faw.

Once upon a time, there were 13 streams in the area irrigating more than two million palm trees. But now the state-run media IRNA reported: “One million thirsty palm trees of Abadan are in one step to the death”.

What is shocking is that the palm trees of this region are located between the two great rivers of Arvandrood and Bahmanshir, but the palms are always thirsty.

Ahmad Shahabi, a palm orchard owner of this region, says: “The palm trees in this area have been in water supply problems for the past 16 years, and despite the irrigation and drainage network being built eight years ago, we still have this problem, but by shutting down of the irrigation network pumping stations, the water supply is in critical condition for the past three month.”

The conclusion of these two events is that the Iranian regime is absolutely not concerned about the ecological and environmental situation of Iran, which is not only capital for the now leaving population, more important for the coming generations.

Adding these destructions to other nature destruction caused by this regime, like desertification, extreme shortage of water, deforestation and… we will see that they are not leaving much for the coming generations.

DPA: The speaker of Yemen's parliament accused Iran and...