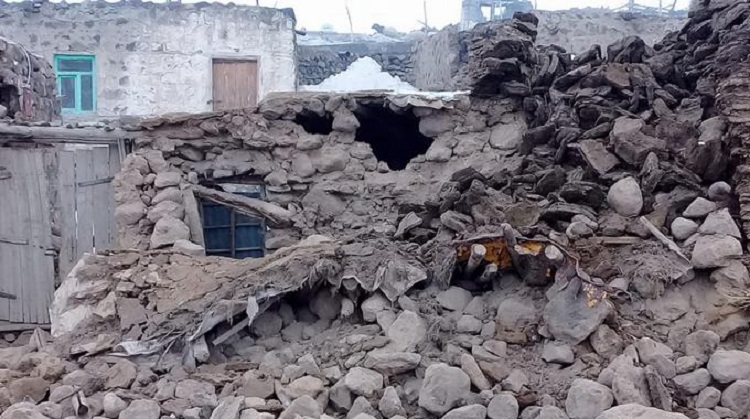 Northwest Iran was hit by a 5.7 magnitude earthquake in the early hours of Sunday, with the areas of Qatar, near Zarabad, most heavily affected. There, residents experienced dozens of aftershocks throughout the day, following the initial quake at 9.23 am local time.

However, many cities across Iran’s East and West Azerbaijan provinces were hit by the six-kilometer deep earthquake, including Tabriz, Osku, Sahand, Urmia, Khoy, and Salmas. West Azerbaijan officials say that 43 villages have over 10% damage, some, like Mokhein, as much as 100%. Over 3,500 homes in the areas are damaged.

Iranian opposition President Maryam Rajavi urged Iranians to support those in need because the government will not provide aid.

Mrs. Rajavi said: “Mullahs’ regime is covering up damages in the 5.7-Richter earthquake in West Azerbaijan. Over 100 villages were damaged. I request help for those affected, especially in Khoy & Salmas & urge vigilance by fellow compatriots in the Province about subsequent aftershocks.”

This earthquake was followed by a second one, this time measuring 5.9 on the Richter scale, at 7:30 pm local time. The region saw 60 or more aftershocks that evening, ranging from 2.5 to 5.9-magnitude, with terrified people pouring into the streets.

Earthquakes are a common enough occurrence in Iran, with the last one hitting in November, but the authorities never prepare for it or the aftermath, which means the Iranian people are left to fend for themselves.

On November 8, at 2:17 am local time, a 5.9-magnitude earthquake hit the provinces of East Azerbaijan, Ardabil, Gilan, Zanjan and West Azerbaijan, killing at least six people and injuring over 350. The epicenter was in Tark, East Azerbaijan Province, just 400 kilometers from Tehran. People terrified of aftershocks, slept in the streets or their cars, despite the freezing weather.

Again, Mrs. Rajavi, who is the president-elect of the National Council of Resistance of Iran (NCRI), expressed her condolences and urged Iranians to help their fellow citizens because the regime would not.

In 2018, following an earthquake in Kermanshah Province, Iranian member of parliament Farhad Tajari admitted that people were still not given adequate shelter after their homes were destroyed, with many forced to sleep in tents or cars. He warned that if the government didn’t do anything, the area would be deserted.

There was no chance that the authorities would do something, of course. They claim to rush in, but it is the people who help each other.

AFP: The Netherlands on Saturday summoned Iran's ambassador after...

An island kingdom feels the ripples from Iraq and Iran