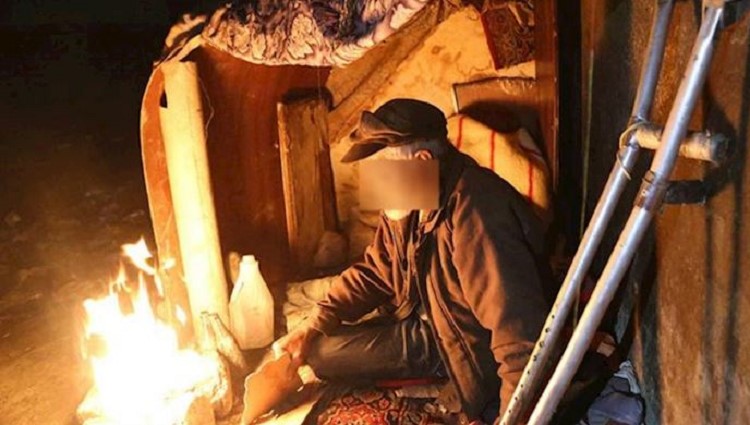 “There are also unofficial workers who work for a living. It is neither about muscle, helmets, nor tools and heavy machinery. Here you see minors, weak minors who struggle hard to make ends meet… They see no future for themselves… I know that this report may upset you… However, it is not about demonizing or whitewashing, it is the bitter truth that no one can and should hide.”

The above sentences were part of a piece about laborers’ conditions in Iran on April 29. The author reminded the rulers that there are impoverished citizens who spend 20 hours a day to find some food by scavenging through garbage. These deprived people collect and sell garbage and trash in several garages and they are forced to spend their nights in such polluted places.

This report is merely the tip of the iceberg of the disastrous situation of many Iranian citizens, who are compelled to search garbage containers for being alive alone. However, officials claim the Iranian people enjoy unique security and honor under their rule.

“Following the November protests against hikes in gasoline prices, 60 million people became an inductee of livelihood subsidies according to the administration. The announcement proved that at least 75 percent of the country’s 80-million population is living in poverty. Giving a $62 loan to subsidy-receivers on behalf of the administration is a joke in this status quo,” Tabnak website quoted Jamsaz as saying.

“All the administration’s financial resources truly belong to the people. The oil revenue that gains by extracting and exporting belongs to the people. The properties and wealth of several institutions have inflated at the expense of the people and belong to them. These institutions should bear the cost of countering the coronavirus and compensation for damages of entities and individuals. Maybe, we would not need to foreign loans if these institutions had spent their asset to support citizens and revive the [country’s] economy,” Jamsaz added.

What is the share of needy people from their country’s resources? Are they really deserve to spend three, five, or even twelve years in trashes without any ray of hope?

“I spent all the winter outside. Our backs were broken… It was a tough cold. For twelve days, we spent all night beside the fire to not sleep and freeze. After twelve days, we fainted from the exhaust and our friends were covering us to not freeze… We were saying that we will not die if we see the spring,” a worker explained what he passed in the last winter.

This is a small part of millions of impoverished citizens who only struggle to be alive. Remarkably, the Islamic Republic’s founder Ruhollah Khomeini constituted a foundation under the pretext of supporting the Mostasafan [underprivileged].

However, neither Khomeini nor his successor, the current billionaire supreme leader Ali Khamenei, have yet to contribute national resources for needy segments of the society. Instead, they monopolized the country’s wealth and distributed it among their regional allies like Lebanese Hezbollah, Iraqi Shite militias, Houthis rebels in Yemen, and the butcher of Damascus Bashar al-Assad.

The result of four decades of oppressive clerical rule is the creation of a corrupt minority who seized 95 percent of national resources by suppression and suffocating any opposite voice. This minority is just four percent of the society according to former Tehran’s mayor Mohammad Bagher Ghalibaf. They built up luxury lives at the expense of ordinary people of Iran and left millions of poor employees and workers, as well as daily and contract workers, and unemployed, homeless, hungry, garbage collector residents.

Over the past 40 years, no official questioned why the number of underprivileged people is increasing daily despite the rulers’ promises and claims? Also, who is responsible for such circumstances? Don’t Iranian authorities have any property? What was the fate of the three-trillion-dollar income of the government from exporting oil, condensate, and mineral resources?

In fact, Iranian authorities try to bridge the gap between themselves and the protesting society by charity. However, they do not offer even charity for free and they demand 12-percent interest for a $62 loan.

Khamenei’s silence about the corruption which has engulfed the entire ruling system proves his privileges from the continuation of this condition. The ayatollahs frequently invite ordinary people to be content despite four decades of hardship and suppression. Their children simultaneously benefit from the country’s capital and continue their education in foreign universities in the U.S., European states, Canada, and Australia.

This flagrant discrimination prompted Iranians to demonstrate the ire against the leaders in any opportunity. In this respect, Iran’s labor community had and has the lion’s share in protests and uprisings like last November. Certainly, these impoverished deciles of population, who had borne consequences of the ayatollahs’ suppression and aggression abroad, will not remain silent, and more social protests are in the way.

AP: Iranian state television is reporting that authorities have...