AFP: Qatar’s new emir on Wednesday said his country seeks strong ties with “all governments” in his first speech since taking power, as he swept aside the powerful prime minister who had served his father before him. By Taieb Mahjoub 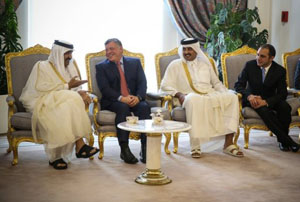 DOHA (AFP) — Qatar’s new emir on Wednesday said his country seeks strong ties with “all governments” in his first speech since taking power, as he swept aside the powerful prime minister who had served his father before him.

“We seek to preserve relations with all governments and countries and we respect all sincere, active and effective political directions in the region but we do not support one side over the other,” said the 33-year-old emir.

The new emir made no reference in his speech to the Syrian conflict, which has left more than 100,000 people dead since it erupted in March 2011 and has spilled over into neighbouring states.

The outgoing emir had strongly backed rebels fighting the regime of Syrian President Bashar al-Assad, and his prime minister Sheikh Hamad bin Jassem al-Thani did not hesitate to take the lead among Arab states in the Libyan and Syrian uprisings.

The director of the influential Al-Jazeera television network, Ahmed bin Jassim al-Thani, was appointed minister of economy and trade.

Sheikh Ahmed, a member of the ruling family, announced his resignation as Al-Jazeera head, a post he had held for two years, in a statement just minutes before the new cabinet was announced.

The historic transition of power from father to son in a region where autocrats cling to power for decades was widely welcomed by the Qatari press as “a first and unprecedented” decision.

The change is not expected to affect the general policies of US-ally Qatar, which has solidly backed the Arab Spring uprisings.

“There will be no substantive change in Qatar’s foreign policy,” says Ibrahim Sharqieh, deputy director of the Brookings Doha Center. “Sheikh Tamim is the product of his father’s political process, which has continued since his accession to power in 1995.”

The departure of the flamboyant Sheikh Hamad, known for his controversial personality as chief diplomat since 1992, “will certainly result in a change in style but not substance,” said Sharqieh.

“Qatar has built bridges with emerging forces in the region, such as Islamist movements including the Muslim Brotherhood, who made their breakthrough in Arab Spring countries,” rising to power in Egypt and Tunisia, he said.

This “will not change during the reign of Sheikh Tamim,” said the analyst.

Such a message would not go down well in Iran, which on Wednesday urged the new emir to reconsider Qatar’s support of rebels fighting President Bashar al-Assad’s regime in Syria, Tehran’s ally.

US Secretary of State John Kerry, travelling in the region, too extended his greetings.

A US official accompanying Kerry on his visit Wednesday to Kuwait said the top US diplomat had called Sheikh Tamim and voiced hope for further cooperation with the increasingly active nation.

“(Kerry) reaffirmed that the United States will continue to stand by Qatar as a valued partner,” the official said.

Sheikh Tamim inherits a state that, under his father’s rule, developed into a political and economic powerhouse with multi-billion-dollar investments across the world.

Under the outgoing emir, Qatar played a role in Middle Eastern affairs massively out of proportion to its size.

Iran will not abandon enrichment – FM