Daily Telegraph: Iran has been secretly constructing a vast underground complex to hide a nuclear facility in the mountains east of Tehran in a development that would violate the UN sanctions regime, it has been claimed.

Iran has been secretly constructing a vast underground complex to hide a nuclear facility in the mountains east of Tehran in a development that would violate the UN sanctions regime, it has been claimed. 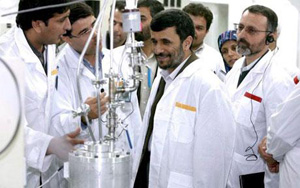 The site, code-named 311, is set inside a military base near Abyek, 75 miles outside the capital, and consists of a series of four bombproof tunnels made from reinforced concrete set 656ft (200m) deep inside a desert ridge.

The People’s Mujahedeen of Iran, an opposition group with an extensive network inside the country, said Tehran launched construction at the facility in 2005 and had spent $100 million (£65 million) on the tunnels.

The group has previously revealed secret atomic plants at Natanz and Qom that the Iranian regime has subsequently acknowledged to be nuclear facilities.

The exiled opposition group is a radical but deeply rooted enemy of the Islamic Republic and its armed wing Mujahedeen e-Khalk is proscribed as a terrorist organisation in the US.

“This is certainly part of the secret weapons program,” said Alireza Jafarzadeh, a spokesman for the group who presented photographs of the site in Washington. “It’s just moved underground, in tunnels, hidden from the outside world.”

The organisation said it had already passed the information, which includes eyewitness reports from inside the facility and satellite images showing considerable development in the remote area, to the US government.

If construction was started in 2005 it would represent an embarrassing failure of US intelligence which concluded the Iranian leadership had suspended enrichment of uranium, the key component of a nuclear weapon, at the time.

A Western diplomat said the International Atomic Energy Agency (IAEA), the UN agency that safeguards atomic materials, would be expected to examine the report. If the information is credible the IAEA would demand access to the site to ensure that no refinement of uranium or other nuclear materials had taken place there.

“Any new plant would be in contravention of a six UN security council resolutions warning Iran to suspend all enrichment and reprocessing activities,” the diplomat said.

Iran has maintained that it does not need to notify the IAEA of construction of a nuclear plant until 180 days before it is commissioned. However, the agency believes that Iran is under an obligation to confirm its intention to construct a plant.

The IAEA has established a substantial inspections regime at Natanz where, a report said this week, that Iran had processed 2.8 tonnes of low-enriched uranium, enough to manufacture two nuclear weapons, and 48lb of higher refined material that could more easily be converted into a bomb.

The People’s Mujahedeen of Iran said that Iran was believed to be about one year from commissioning the Abyek site but that there had recently been a worrying escalation in the amount of electricity being consumed by the plant. It said that electricity usage had doubled in recent months, though the group could not confirm that Iran had move centrifuge equipment to refine uranium to the plant.

Iranian officials have vowed to pursue a nuclear energy programme in defiance of international pressure. Officials have said there are plans to build 10 uranium enrichment plants in secret locations including mountain tunnels.

Meanwhile in Tehran the Culture Ministry said one of the three Americans jailed for crossing the border with Iraq more than a year ago would be released tomorrow.

Shane Bauer, 27, Sarah Shourd, 31, and Josh Fattal, 27 have been accused by Iranian authorities of spying and of illegally entering Iran.

The three insist they entered the Islamic republic by mistake after being lost during a hike in Iraqi Kurdistan, while US authorities says they are innocent and should be released immediately.

Wall Street Journal: As the White House's campaign to...