Reuters: Iranian print media will be shut down if they publish news about the opposition, a senior state official was quoted by an opposition website as saying, pointing to a fresh crackdown on freedom of speech in the Islamic state. 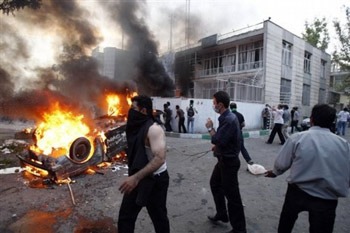 TEHRAN (Reuters) – Iranian print media will be shut down if they publish news about the opposition, a senior state official was quoted by an opposition website as saying, pointing to a fresh crackdown on freedom of speech in the Islamic state.

Dozens of pro-reform activists have been imprisoned and sentenced to long jails in the past few weeks, something analysts say is meant to uproot opponents of President Mahmoud Ahmadinejad, who was re-elected in a disputed vote last year.

“Those publications that publish statements and pictures of the sedition (opposition) leaders will be warned and then closed down if they continue to do so,” senior Culture Ministry official Ehsan Ghazizadeh, who oversees domestic media, was quoted by the opposition website Kaleme as saying, in remarks also published by other media in Iran.

The Culture Ministry supervises activities of domestic and foreign media in the Islamic Republic.

Over a dozen pro-reform publications and websites have been shut down since the June 2009 presidential election, making it hard for opposition leaders — defeated candidates Mirhossein Mousavi and Mehdi Karoubi — to reach out to ordinary Iranians.

Iran’s state media are run by hardliners and requests by moderate opposition leaders to launch private TV stations have been rejected by the state.

Ghazizadeh said government financial assistance to those newspapers that ignore pro-government news would be stopped.

“Those newspapers that do not cover news related to pro-government events … should not expect getting … subsidies and (financial) support,” he said, referring to the help Iranian dailies receive from the government.

The post-election street protests, the worst unrest since the Islamic Republic was founded in 1979, were quelled by the elite Revolutionary Guards. Mass detentions and trials followed. Two people were hanged and scores of detainees remain in jail.

The last major opposition protest, in December, led to clashes with security forces in which eight demonstrators were killed. Opposition candidates say the vote was rigged, a charge rejected by Iranian Supreme Leader Ayatollah Ali Khamenei.

The authorities have portrayed the opposition movement as a foreign-backed plot to undermine the Islamic establishment, an accusation denied by the opposition leaders.

The Guards have repeatedly warned the opposition not to create a “security crisis” by reviving anti-government unrest.