AFP: Western nations on Friday accused Iran of stepping up illegal arms trading and made calls for tougher UN sanctions. 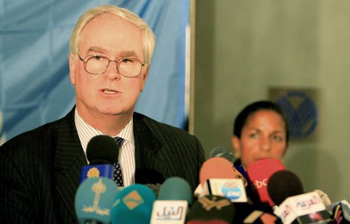 Britain told the UN Security Council that new Iranian individuals and entities should be added to sanctions lists while France said there should be a detailed investigation of Iran’s sanctions-busting.

The concerns were raised after the seizure of 13 containers of rockets, mortars and other weapons in Nigeria last month and up to seven tonnes of high explosive in Italy in September.

British ambassador Mark Lyall Grant told a Security Council meeting on Iran sanctions that the new seizures were part of “a pattern of violations” after other raids, some involving Iran’s weapons trade with North Korea.

France’s representative, Martin Briens, said the seizures show that the four rounds of UN sanctions ordered against Iran’s nuclear program are having an impact.

“Iran has to make use of increasingly complex and complicated routes and schemes. Thus we can only underscore the gravity of this type of smuggling,” Briens told the council.

He said Iran was behind “a considerable flow of arms and other dangerous material” and that “worrying new routes” for shipments have been found in Africa.

“This is without doubt only the tip of the iceberg,” he declared, calling for a more detailed investigation of the two new cases and the “evasion techniques” used by Iran.

US ambassador Susan Rice backed the calls for a more thorough investigation which she said would “help us better understand and to halt Iran’s arms smuggling and proliferation networks in violation of this council’s resolutions.”

Nigerian agents seized 13 containers of weapons in the port in Lagos in October. The containers were loaded at the Iranian port of Bandar Abbas and were reportedly destined for Gambia.

An Iranian and three Nigerians face charges in Nigeria. Authorities there also wanted to question an Iranian diplomat, but the Tehran government has refused to lift the diplomat’s immunity.

Customs officers at Gioia Tauro in southern Italy seized between six and seven tonnes of RDX high explosives on September 21 that were en route from Iran to Syria, according to Italian media.

The explosives were hidden in a container transporting powdered milk.

The West accuses Iran of seeking a nuclear bomb. The Islamic state insists its research is peaceful.

Council ambassadors welcomed this weeks talks between Iran and the six international powers in Geneva and the plan for more in January. But the Western powers again warned that Iran risked deeper isolation if it was not more cooperative with nuclear investigators.

“We are clear that the next talks should include a candid discussion on the many international concerns relating to the Iranian nuclear program and Iran needs to show real progress in these concerns,” said the British ambassador.

If Iran “builds international confidence and respects its obligations we will reciprocate. But if Iran refuses its isolation will only grow,” warned Rice.

Iran to use “all tools” to stop currency slide

Reuters: Iran said on Tuesday it would let U.N....