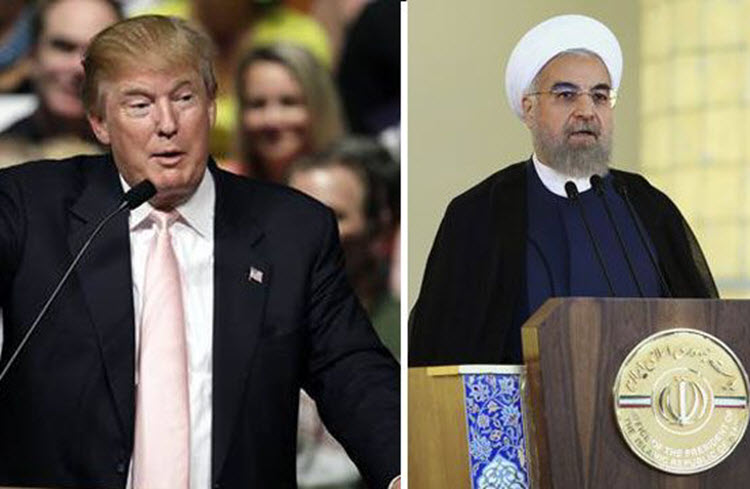 Writing for the American Thinker on 3 February, Alavi said:

Iran was involved in a long slate of aggressive measures up to the very doorsteps of President Donald Trump taking the helm in Washington. This concerning pattern of escalating extremism ironically increased following the Iran nuclear deal sealed between the P5+1 and Tehran, despite many in the West arguing such an accord would rein in the mullahs. And now, a new U.S. president has rightfully pinpointed “radical Islamic terrorists,” of which the root lies in Iran.

Further to the mullahs’ advantage was the Obama administration’s reluctance to adopt any serious stance against Iran running its Shiite extremist rampage across the region. Obama’s White House only imposed sanctions considered anything but harsh.

This paved the path for Iran to unleash its Shiite puppets and proxies throughout the region, cementing sectarian strife and as a result pushing more Sunni youth to join ISIS and other radicals.

Obama’s nuclear deal, with all its flaws made evidently clear, only placed speed bumps in Iran’s quest for the bomb. This came at the heavy price of America losing the trust of its regional allies, disheartening them also in their efforts against Iran-supported terrorism in their backyards.

President Donald Trump has rightfully pinpointed the root of all crises in the Middle East.

“We will reinforce old alliances and form new ones — and unite the civilized world against radical Islamic terrorism, which we will eradicate completely from the face of the Earth,” he said.

This is exactly where the Trump administration has an extraordinary opportunity to begin launching a widespread strategy vis-à-vis Tehran, targeting specifically the disease Iran is spreading: meddling across the region and fueling sectarian emotions.

While the international community was focused sealing the Joint Comprehensive Plan of Action (JCPOA), Iran used the opportunity to storm Syria and Iraq with Shiite militias dispatched from Afghanistan, Pakistan, and its own paramilitary forces, all commanded by the Revolutionary Guards (IRGC).

Iran’s atrocities had reached the point that even Secretary John Kerry’s State Department cited Tehran’s scope of “activities to destabilize the region” in designating Iran as the world’s state sponsor of terrorism.

President Trump and his team can easily take action by simply covering the numerous loopholes left by the Obama administration. U.N. travel bans on senior Iranian figures, including IRGC Quds Force chief Qassem Suleimani. This individual is known to travel across the Middle East and literally wreak havoc by commanding Iran’s Shiite militias.

Iran has also taken advantage of Obama’s negligence — aiming to safeguard his previous Iran-JCPOA legacy — to pursue its ballistic missile ambitions and carry out major test launches. This has been in violation of U.N. Resolution 2231, and President Trump can easily begin holding Tehran accountable.

Iran came to the nuclear negotiations following continuous revelations made by Iranian opposition National Council of Resistance (NCRI) and under pressure from international sanctions. This policy has worked once and it can work again. President Trump and his team should care less about Iran’s remarks or reactions in threatening to “burn” the JCPOA.

Iran’s financial pipeline, established through a windfall of billions provided to Iran under the nuclear pact, should come to an end, and licenses revoked for Airbus and Boeing deals. Iran’s airlines are known to provide manpower and weapons to Syrian dictator Bashar Assad and Lebanese Hizb’allah.

These efforts only promote further killings and, as previously explained, instigate a Shiite-Sunni conflict across the Middle East. Iran is profiting from the existence of ISIS, using this phenomenon as a pretext to justify its presence in Iraq and Syria.

President Trump can also team up with Congress under a new bipartisan effort aiming to curb Iran’s destabilizing role in the region. A strong foundation can be found in the Preventing Destabilization of Iraq and Syria Act of 2016 aiming to mandate new sanctions against foreign states and terrorist organizations.

This initiative must include Iran, as the mullahs are known to “threaten the peace or stability of Iraq or Syria,” as the bill explains. U.S. allies can benefit extremely, especially the Gulf Sunnis that Obama sidelined in the past eight years.

“The regime in Tehran is the source of crisis in the region and killings in Syria; it has played the greatest role in the expansion and continuation of ISIS.

Peace and tranquility in the region can only be achieved by evicting this regime from the region,” said NCRI President Maryam Rajavi.

The NCRI is an umbrella dissident group including the People’s Mojahedin Organization of Iran (PMOI/MEK).

And yet the nail in the coffin for the mullahs would be for the Trump administration to stand shoulder to shoulder with the Iranian people in their struggle to establish freedom and democracy. Nearly two dozen former senior U.S. government officials provided such a game-plan to President in a hand-delivered letter encouraging his administration to work with the NCRI.

Such initiatives send clear messages to Tehran about the unacceptable nature of its current involvement in the flashpoint Middle East. As President Trump takes actions to diminish Iran’s role across the region, especially from backing Assad, sectarian friction will diminish and all efforts can focus on ISIS.

AP: Iran's president blamed the West on Wednesday for...

AFP: The Iranian Red Crescent has decided to send...