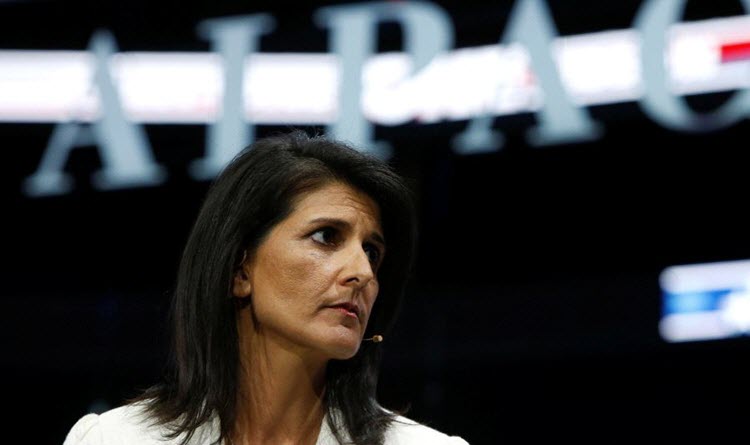 London, 28 Mar – At the AIPAC conference in Washington on Monday, United Nations Ambassador Nikki Haley was warmly received by the audience. She spoke about Iran and its negative influence in the Middle East and the dangerous consequences of the nuclear deal signed in 2015.

Haley, on several occasions, criticised the Obama administration’s treatment and enforcement of the nuclear deal, saying: “When the Iran deal took place, all it did was empower Iran and it empowered Russia.”

President Trump has been a loud critic of the Iran nuclear deal and vowed to scrap it during the election campaign, calling it the “worst” deal. Although the deal is still intact, Trump vows to be aggressive with Iran.

And he did start his term in office with a certain degree of firmness. In February, the National Security Adviser (Michael Flynn who has since resigned) announced that the White House had put Iran “on notice”.

Iran was warned that there was a new president in town, including Haley who described President Trump as the “new sheriff” in town.

Strongly criticising Iran, Haley said that the best she could promise was that the Islamic Republic was going to be very closely monitored.

She then went on to talk about how difficult it would be to reinstate Iranian sanctions, saying that the United States was going to nevertheless remain vigilant, despite the security council’s reluctance to call Iran out on its infractions of international laws. She said: “My concern is that you’re seeing a lot of love in the security council, and that’s unfortunate.”

Despite some tough talk from the United Nations ambassador, when she left the stage, despite the thunderous applause, it was hard not to feel disappointed that the approach was to just wait and see how things go.

The House Speaker spoke on the same day at the conference and warned about the threat of Iran, not just to the United States, but to the rest of the world too. Paul Ryan said that the nuclear deal was a “disaster” and recommended that the Iranian Revolutionary Guards Corps (IRGC) is designated as a foreign terrorist organisation.

She said: “(The situation is) dangerous for the United States and the world. It is long past time that we rigorously enforce this deal and hold the Iranians accountable when they violate it.”

She added: “A fatal flaw in this agreement is that even if Iran cooperates it provides them with a patient pathway to nuclear capability. We must continue to hit the regime with punishing non-nuclear sanctions for its range of illicit activities.”

Iran defiant on enrichment ahead of possible nuclear talks

Reuters: Iran will not stop higher-grade uranium enrichment in...