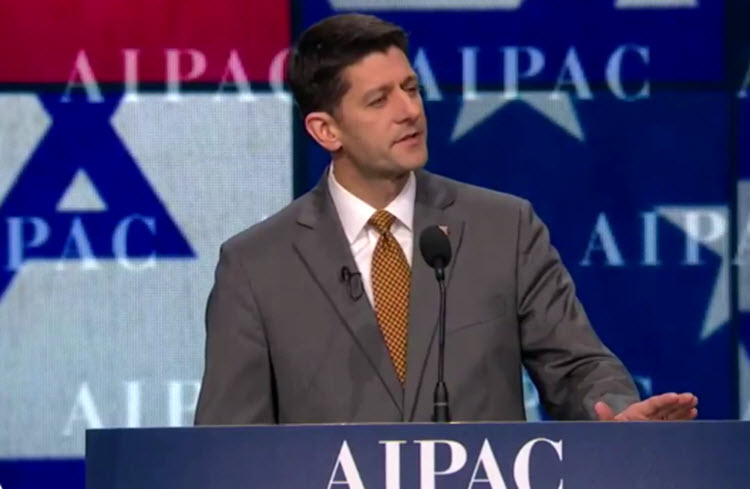 London, 28 Mar – Speaker of the United States House of Representatives, Paul Ryan, spoke about Iran yesterday at the 2017 AIPAC Policy Conference in Washington. His rhetoric was tough and firm and he said that the Islamic Republic poses a great danger to the national security of the United States.

He called for non-nuclear sanctions to be imposed on Iran’s ruling regime and advised that the country’s Revolutionary Guards (IRGC) should be designated as a foreign terrorist organisation.

Ryan fiercely criticised Iran and President Obama’s treatment, or appeasement, of the country, reassuring the audience that the Trump administration will act rather than just talk. He said: “Our words will always be backed up with real concrete actions.”

Regarding the Iran nuclear deal signed in 2015 under the Obama administration, Ryan had a very strong critique. He said that it was a “disaster”, similar to how Donald Trump described it during the election campaign. “(The nuclear deal) has been an unmitigated disaster – and I don’t say that lightly.”

Ryan pointed out that since the nuclear deal was signed, instead of the situation with Iran in the Middle East improving, the opposite has happened. He emphasised that the country has ramped up its support of terrorism abroad and is committing more human rights crimes than ever. He also mentioned the test-firing of ballistic missiles that Iran has been carrying out and noted that the country gained large amounts of additional funds as a result of the sanctions relief that followed the nuclear deal.

He also warned that Iran poses a danger to the rest of the world too. He said that the Iranian regime has been violating the terms of the deal since day one and has been allowed to get away with it by the Obama administration.

“(The situation is) dangerous for the United States and the world.” He added: “It is long past time that we rigorously enforce this deal and hold the Iranians accountable when they violate it.”

“A fatal flaw in this agreement is that even if Iran cooperates it provides them with a patient pathway to nuclear capability. We must continue to hit the regime with punishing non-nuclear sanctions for its range of illicit activities.”

Ryan said that the most important step moving forward was to rectify the “most fatal flaws” of the nuclear deal and echoed the words of President Trump: “When it comes to preventing a nuclear Iran, all options can and must remain on the table.”

AP: The United States and the European Union demanded...

Why the West must address human rights abuses in Iran?