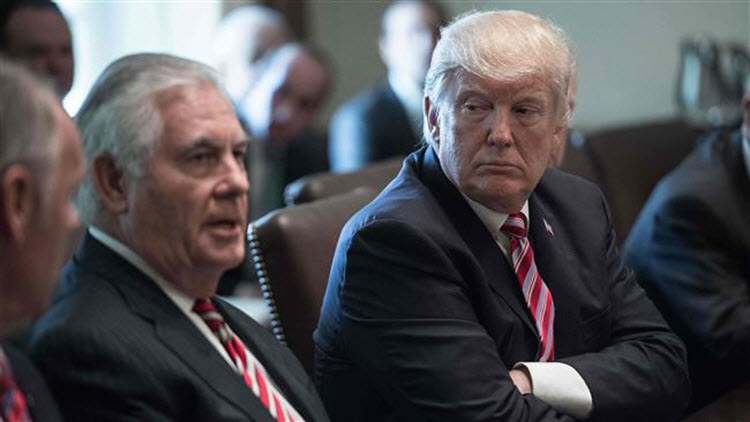 President Donald Trump angrily sidelined the State Department and assigned trusted White House staffers with making the potential case for withholding certification at the next review of the Iran nuclear deal, Foreign Policy reported. Cathy Burke wrote in ‘News Max’ on Sunday, July, 23 and the article continues as follows:

The decision came after a “contentious meeting with Secretary of State Rex Tillerson,” according to the article.

“The president assigned White House staffers with the task of preparing for the possibility of decertification for the 90-day review period that ends in October — a task he had previously given to Secretary Tillerson and the State Department,” an unnamed source told FP.

FP explained that Trump relayed the new assignment last Tuesday to a group of White House staffers after he reluctantly signed certification.

“This is the president telling the White House that he wants to be in a place to decertify 90 days from now and it’s their job to put him there,” the source told FP.

According to FP, three unnamed sources described the new process as a way to work around the State Department, which the president felt had given him no other options but to sign certification.

“This is about the president asking Tillerson at the last certification meeting 90 days earlier to lay the groundwork so Trump could consider his options,” one of the sources said.

“Tillerson did not do this, and Trump is infuriated. He can’t trust his secretary of state to do his job, so he is turning to the few White House staffers he trusts the most,” the source added.

According to FP, there’s been friction for “months” between the White House and State Department over how to handle the Iran nuclear pact — something Trump had vowed to tear up during his presidential campaign.

Last Monday, as the administration was set to certify that Iran was meeting the necessary conditions, “the president expressed second thoughts around midday” and a meeting between Trump and Tillerson that afternoon “quickly turned into a meltdown,” FP reported.

“The president kept demanding why he should certify, and the answers Tillerson gave him infuriated him,” one source told FP.

Tillerson is “trying to be a counterweight against the hard-liners, trying to save the [nuclear deal], but how long can that last?” one unnamed senior State Department official told FP. “The White House, they see the State Department as ‘the swamp.'”

Tillerson’s communications adviser, R.C. Hammond, disputed the account of the meeting between Trump and Tillerson, however.

“Not everybody in the room agreed with what the secretary was saying,” Hammond said. “But the president is certainly appreciative that someone is giving him clear, coherent information.”

“Fiction can be fun when you’re an anonymous source,” he added.

AP: The most potent challenge to Iran's ruling system...

The West's appeasement of Iran during the nuclear talks...