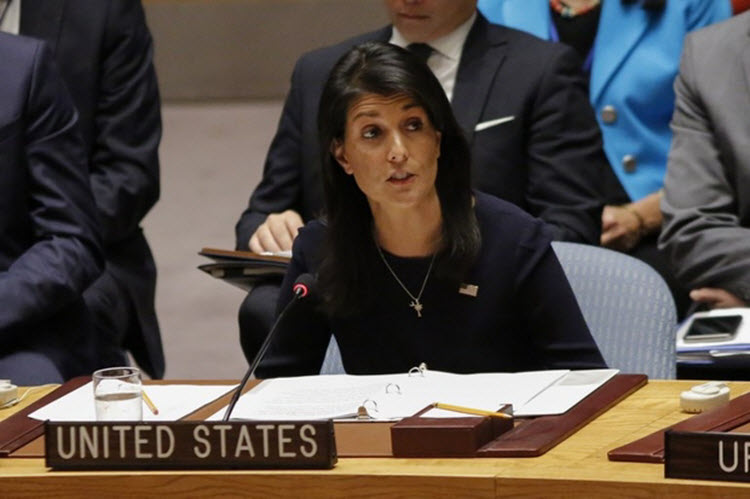 London, 11 Sep – US Ambassador to the United Nations Nikki Haley delivered a thoughtful and impassioned speech on the threat posed by the Iranian Regime and the future of the nuclear deal, last week.

In the speech, Hayley addresses that there are three main things to consider when talking about the Joint Comprehensive Plan of Action (JCPOA); the deal itself, UN Resolution 2231, and the Iran Nuclear Agreement Review Act (“the Corker-Cardin law”).

Hayley points out that the deal is flawed (for example, it does not have the capability for anywhere/anytime inspections) but that Iran has still managed to violate the lax provisions that it has.

The nuclear deal, which only has the provision for 24/7 inspections to Iran’s ‘declared’ nuclear sites, is also prevent the International Atomic Energy Agency (IAEA) inspectors from doing their job.

Hayley said: “The biggest concern is that Iranian leaders – the same ones who in the past were caught operating a covert nuclear program at military sites – have stated publicly that they will refuse to allow IAEA inspections of their military sites.”

The UN resolution preventing the testing of ballistic missiles, which binds the deal, has been broken by Iran on multiple occasions but there has been no international reaction.

Haley said: “Every six months, the U.N. secretary general reports to the Security Council on the Iranian regime’s compliance with this so-called “non-nuclear” resolution. Each report is filled with devastating evidence of Iranian violations. Proven arms smuggling. Violations of travel bans. Ongoing support for terrorism. Stoking of regional conflicts.”

Although originally maligned by American conservatives, this could be the key to strengthening the US’s hand against Iran. This law, which requires that the President to certify to Congress every 90 days that Iran is complying with the nuclear deal, asks the President to “certify that the suspension of sanctions against Iran is appropriate and proportionate to Iran’s nuclear measures, and that it is vital to the national security interests of the United States”.

Haley said: “So regardless of whether one considers Iran’s violations of the JCPOA to have been material, and regardless of whether one considers Iran’s flouting of the UN resolution on its ballistic missile technology to be non-nuclear, U.S. law requires the President to also look at whether the Iran deal is appropriate, proportionate, and in our national security interests.”

Jennifer Rubin wrote on Track Persia: “Haley deserves credit for clearly articulating the issues. Now we need the administration to step up with a responsible game plan, enlisting Congress to work in a coordinated fashion to check Iran’s nuclear and nonnuclear behaviour.”

Kazakh yellowcake uranium transfer to Iran would be illegal

AFP: The United States has warned that any potential...