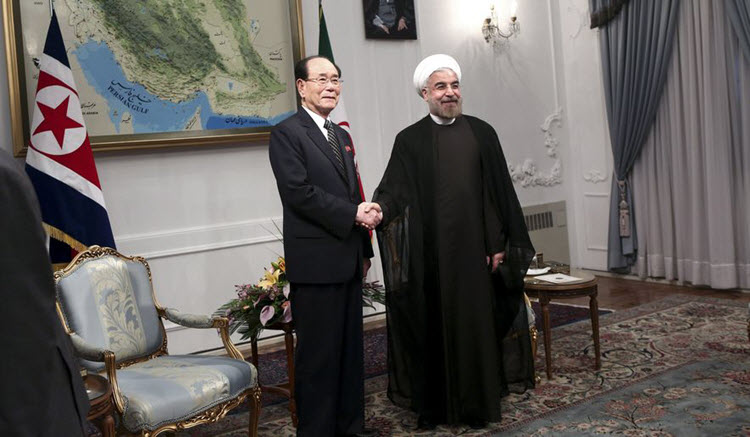 London, 26 Sep – There is ever-growing speculation that the Iranian Regime is providing North Korea with the funds to develop its nuclear programme, in spite of the heavy sanctions against the rogue Asian country, and Donald Trump appears to confirm this.

This collaboration on nuclear and missile technology has not been announced by either Iran or North Korea but many in the Western intelligence community see this as an “unquestionable fact”.

Back in July, Jeffrey Lewis, director of the James Martin Center for Nonproliferation Studies, wrote: “The second stage of North Korea’s Hwasong-14 missile is similar to the upper stages designed for the Iranian space launch vehicles.”

This type of cooperation between the two countries is nothing new. They are believed to have started collaborating in the 1980s, when Iran created the Shahab-3 medium-range ballistic missile which is incredibly similar to North Korea’s Nodong.

The missile that Iran claimed to have successfully tested on Saturday is highly reminiscent of North Korea’s Musudan intermediate-range ballistic missile.

Yuri Fedorov, an expert on the Russian military, said that it is likely that Iran and North Korea are still working together because different restrictions on each country mean that it would be hard- if not impossible- for them this nuclear technology alone.

He said that whilst Iran is explicitly forbidden from developing nuclear weapons under the 2015 deal with the US and five other world powers, they are subverting the restrictions by conducting research in North Korea.

North Korea is struggling under heavy financial sanctions and would be unable to fund this research unless they were receiving a cash injection, perhaps from a country that had billions of dollars in foreign accounts unfrozen as part of the nuclear deal. They also needed access to nuclear research that Iran already held in order to have such a vast improvement in their technology in such a short amount of time.

Kim Yong Nam, chairman of the Supreme Assembly of North Korea, and a delegation of military experts recently visited Iran, which raises the question of why?

There is some speculation that Russia may be helping Iran and North Korea in nuclear development – or at the very least offering approval- in order to counter the US.

Fyodor Lukyanov, a well-known Russian commentator on diplomatic issues, said that Russian President Vladimir Putin wants to use the North Korean conflict to change global politics which skew in favour of the West. However, given his close relationship with Trump, it is possible that Putin may not be involved.