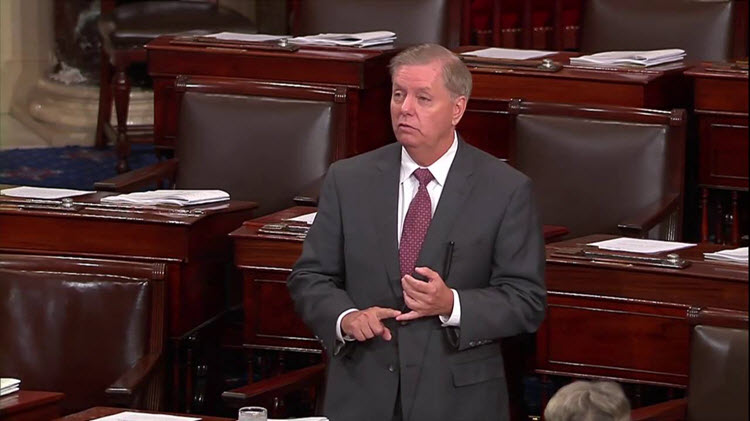 London, 21 Oct – According to Republican Senator Lindsey Graham, from South Carolina, a longtime lawmaker, Senate Republicans plan to introduce legislation that will add new conditions to the legislation that gives them review authority over the Iran nuclear deal.

Graham said the current Joint Comprehensive Plan of Action (JCPOA) is “a lousy deal” and explained President Donald Trump refused to re-certify it because “the benefits to Iran are [not] worth what we’re getting.” Graham added that he will work with Armed Services Committee member Senator Tom Cotton of Arkansas, and Foreign Relations Committee Chairman Senator Bob Corker of Tennessee, both fellow Republicans, to craft legislation regarding Iran.

Graham said further that the legislation would re-impose sanctions if Iran continues to develop intercontinental ballistic missiles (ICBM) in violation of a United Nations Security Council resolution, as well as if Iran denies International Atomic Energy Agency (IAEA) inspectors access to nuclear sites they want to visit, or if Iran continues to be “the largest state sponsor of terrorism.”

On October 13th, President Trump refused to re-certify Iran’s compliance with the JCPOA, saying, “since the signing of the nuclear agreement, the regime’s dangerous aggression has only escalated.” This action kicked the issue back to Congress under provisions of the Iran Nuclear Agreement Review Act of 2015, giving Congress the power to quickly re-impose economic sanctions if the president says Iran is not in compliance.

180 congressional Democrats signed a letter to Trump, urging him to re-certify Iran’s compliance, in early October. They were led by Congressmen Ted Deutch of Florida, and David Price of North Carolina, and their letter argued that withholding certification “would harm our alliances, embolden Iran and threaten U.S. national security.”

Graham said he will try to get bipartisan support for “a better deal for the world,” but if Democrats do not provide enough votes for new legislation, he said he will seek to re-impose sanctions under the current INARA legislation. “We need 60 votes [to avoid a filibuster], and to my Democratic friends, I’m willing to get a better deal. I’m not willing to accept the status quo,” Graham said.

Economic sanctions worked to get Iran willing to deal, Graham noted, and said hopes to “rally the world” around re-imposition of sanctions if Iran does not “behave better.”

Regarding tensions between Iraq and the Kurdish autonomous region after Iraqi troops reclaimed the city of Kirkuk and Kurdish separatists withdrew from contested oil fields, a “more cohesive policy” is necessary, according to Graham. In an effort to remove Islamic State from the region, the U.S. has backed both Kurdish peshmerga and Iraqi government forces.

In regards to the tensions with North Korea, Graham said Trump has to convince China that he does not want a war, “but if there’s going to be a war, it’s going to be over there, not in America.”

More than a million alcohol drinkers in Iran: report

AFP - More than a million Iranians drink alcohol, a...