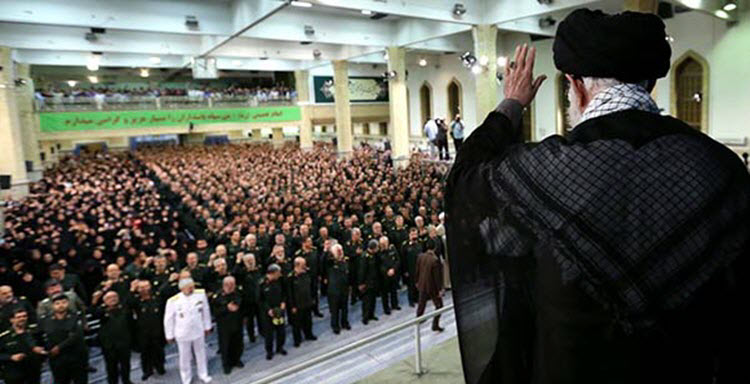 London, 28 Oct – The blacklisting of Revolutionary Guards (IRGC) as a terrorist organization by the U.S. Treasury Department after President Trump’s October 13th Iran policy speech, was a major blow to Tehran.

Hessam-edin Ashena, an advisor to Iranian President Hassan Rouhani, remarked to a state daily, “Sanctions against the IRGC are nothing new… The IRGC is not an economic entity for them to attempt to impact its future through sanctions. The IRGC is a military entity that will negotiate with no one regarding its duties.”

Gholamreza Tajgardoon, chairman of the Budget & Planning Commission in Iran’s parliament, made similar statements. “Sanctioning the IRGC will have no impact on the country’s economy… U.S. sanctions are an issue of international relations. The IRGC has no role in international economic relations. The IRGC is, however, active in military affairs inside Iran and the region,” he told state media.

Despite allegations that the IRGC dominates the Iranian economy, on October 17th, the Vatan-e Emrooz daily, known to be associated with the faction loyal to Iranian Supreme Leader Ali Khamenei, published a piece titled “Black Hole!” that highlighted the “unprecedented economic impact and expenses expected through the mother of all sanctions” on the entire regime apparatus.

Under the subtitle, “The Impact of Economic Sanctions against the IRGC” the piece explains, “Despite its initial goal of numerous security objectives across the Middle East and inside Iran, this section of the mother of all sanctions seeks to dysfunction Iran’s economy, or as U.S. senators have described, shut down and turn off Iran’s economic cycle. Based on the Countering America’s Adversaries through Sanctions Act, first the IRGC and all branches and entities in any way related to the IRGC, alongside all companies cooperating with the IRGC will be designated in the SDN sanctions list.”

As well, if Iran’s Central Bank or National Bank provides services and facilitations to these companies, and they are identified by the U.S. State Department, these firms will be blacklisted in the SDN list of sanctions by the Treasury Department.

This bill is described as the “black hole” of sanctions, precisely because of the major economic quagmire before the Iranian regime.