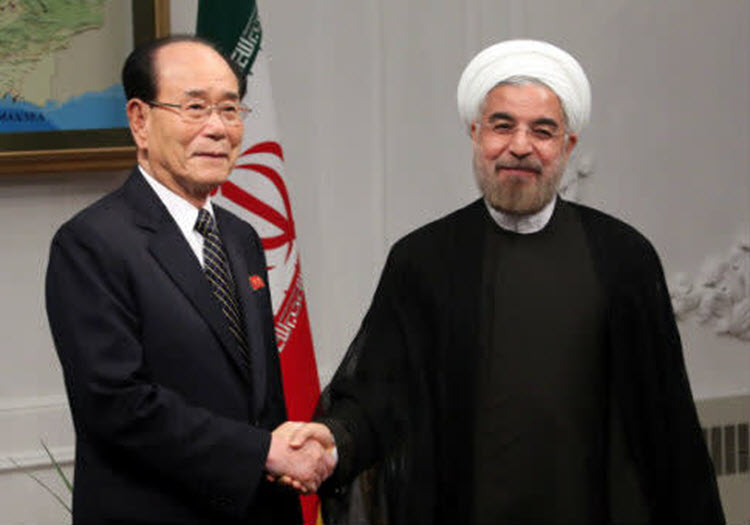 London, 29 Nov – Meetings between high-ranking officials from North Korea and Iran are raising concerns in the US government about the deep military ties between the two rogue nations.

The suspicious meetings began in August, when Kim Yong-Nam, North Korea’s number two political leader and head of its legislature, visited Iran. Officially, he was attending the inauguration of President Hassan Rouhani, but the length of the visit and the size of his delegation set off alarm bells in the US.

Most of these meetings have been so secret that they are not even reported by state media and are recorded by the US and South Korean intelligence services.

Over the past year, North Korean missile capabilities have improved significantly and many Iranian defence officials have been spotted at test sites and missile factories, like Mohsen Fakhrizadeh, an Iranian general whom the UN has accused of working with Fereydoun Abbasi-Davani on secret nuclear weapons research.

While in 2016, the US reported that Iranian missile technicians, from one of the Regime’s most important defence companies, the Shahid Hemmat Industrial Group (SHIG), had travelled to North Korea to help develop an eighty-ton rocket booster for ballistic missiles. Reportedly, Sayyed Javad Musavi, a top official at SHIG, worked with the Korea Mining Development Trading Corp (KOMID), which is under international sanctions for its role in procuring equipment for North Korea’s illicit nuclear and ballistic missile programs.

Officials from in Washington, Asia, and the Middle East who track the relationship between the two countries have said that there is already a collaboration commitment over their ballistic missile systems and other military/scientific programs, which means that their relationship is more deadly than we thought.

One senior US official said: “This will be one of our top priorities.”

This has been backed up by sources in the Iranian Resistance.

North Korea also recently opened an embassy in Tehran, which shows deepening ties between the two nations. The two countries are also presenting a united front against the US and its allies, which includes North Korea supplying weapons to Iran’s ally Bashar Assad in Syria and the Iranian-backed Houthis in Yemen, with which they attack US allies.

Kim said: “Iran and North Korea share a mutual enemy [the United States]. We firmly support Iran on its stance that missile development does not need to be authorized by any nation.”

It is clear that the US and its allies must continue to scrutinise this relationship.