Why Is Assad Nervous About Iran’s Demands? 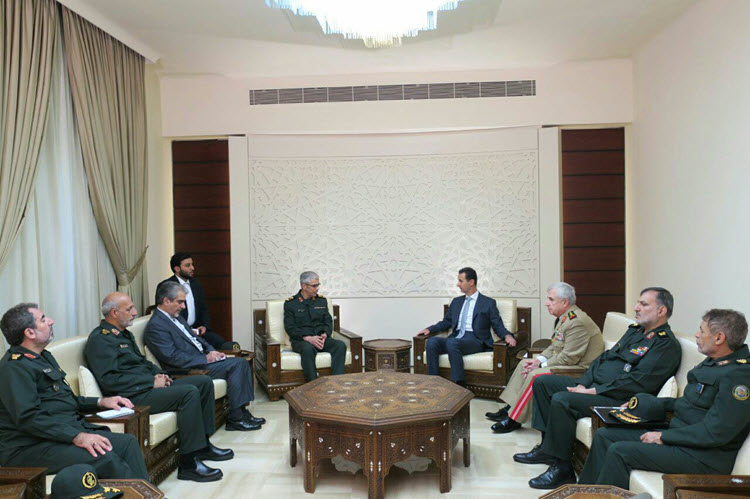 London, 29 Nov – When Iranian chief of staff, General Mohammad Hossein Bagheri, visited Syria, last month, it was supposed to be a show of unity between the two violent regimes, to show what dictators could achieve if they worked together to crush their people, but it now appears that Bashar Assad is getting cold feet about the partnership.

During the meeting with his Syrian counterpart General Ali Abdullah Ayoub, Bagheri presented the Iranian Regime’s list of demands for helping the Syrian dictator to destroy his own country; namely a 50-year lease on a Mediterranean naval base, the establishment of Iranian air bases in Syria, phosphate mining concessions including for uranium, and more.

As it turns out, Assad is not keen to fulfil these requests for a number of reasons but none of them involves standing up to the Iranian Regime or regret for the harm he inflicted on his people.

Although Syria did not reject the demands outright, it didn’t accept them either and – from Iran’s perspective- the visit was less than successful.

Iran had no reason to suspect that Assad wouldn’t agree to the terms- after all, they and their terrorist proxy, Hezbollah, are the reason that Assad has survived the Syrian Civil War. If not for the Iranian mullahs, Assad would have been deposed by the legitimate Syrian Opposition forces long ago. Also, the demands- compared with how Russia is benefitting and not how the majority of the world views that Regime- aren’t that extreme.

Could it be that Assad recognises Iran’s desire to destabilise the Middle East and sees the Regime as a threat to his future survival?

Well, the heads of the Iranian Revolutionary Guards Corps (IRGC) have been pretty open about exploiting the Syrian Civil War and the fight against ISIS to create a land bridge that would extend from the Persian Gulf to the Mediterranean and it looks like they’re getting their wish, especially if US force pull back from Syria’s eastern flank.

If that happens, this could lead to further Middle East conflict between Iran, Syria, and Israel.

Unfortunately, Assad needs the Iranians and will likely concede a lot to make them stay. He already allows Hezbollah and other Shiite militias from Iraq to operate in Syria and provides them with access to war material.

One of the spokespeople for the Shiite militias, Hashem Musawi, announced that his movement wants to establish a “Syrian Golan Liberation” brigade, in coordination with the Syrian government, to fight Israel.

IAEA report on Iran as early as Monday

AFP: The UN nuclear watchdog IAEA will publish its...