Tillerson: The US Will Keep up Pressure on Iran Over Nuclear Deal 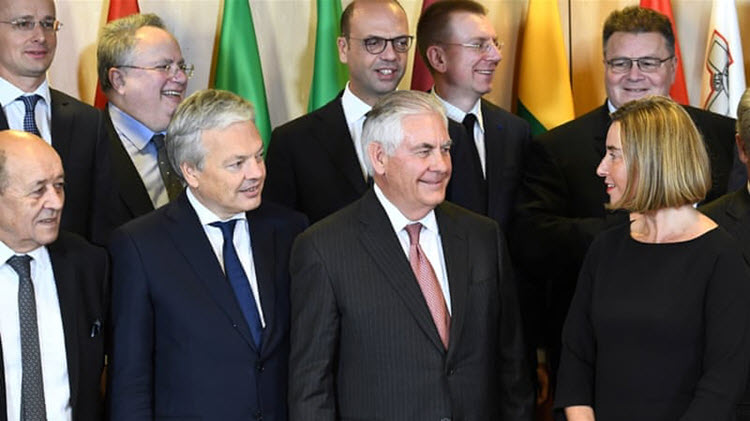 London, 7 Dec – US secretary of state Rex Tillerson said that pressure will continue to be applied to Iran over its nuclear deal commitments during a press conference in Brussels on Tuesday.

Tillerson said: “We discussed … our joint efforts under the Joint Comprehensive Plan of Action [JCPOA] to hold Iran fully compliant with the terms of that deal and fully enforce that agreement.”

This comes as Congress is still deciding whether to re-apply economic sanctions after Donald Trump’s decertification of Iranian compliance with the nuclear deal in October. Congress’ decision is due next week.

Trump had previously called the nuclear pact, between Iran and six world powers (the US, the UK, France, Germany, China, and Russia), “one of the worst deals I’ve ever seen”.

The nuclear deal was supposed to prevent Iran from developing nuclear weapons- by imposing restrictions on Iran’s stockpiles of uranium and their capacity to enrich it- in return for sanctions relief, but it has not worked.

The Iranian Regime is preventing international inspectors from visiting certain sites, working with North Korea on its ballistic missile programme, and even setting up missile production factories in other Middle Eastern states via proxy groups.

Trump accuses Iran of not living up to the spirit of the deal, by continuing its own ballistic missile programme, supporting terrorism, and abusing the Iranian people.

Tillerson cited this in his address. He said that Iran is responsible for a number of destabilizing activities in the Middle East, including support for the Houthi terrorist group in Yemen’s civil war, sending weapons and troops to the Syrian Civil War to assist Bashar Assad, and continued support for US-sanctioned terrorist group Hezbollah.

He said:”These issues and activities of Iran cannot be ignored and cannot go unanswered, and we intend to continue to take action to ensure Iran understands this is not acceptable to us, and we look forward to working with our European partners in that regard.”

Mogherini, who has previously visited Iran for the inauguration of President Hassan Rouhani, her support for the nuclear deal.

However, the US Department of State said that the Iranian nuclear deal has many “serious flaws” that are being addressed.

A spokesperson said: “The president has directed his administration to work with Congress and our partners to fix the JCPOA. We are not encouraging Congress to reimpose sanctions at this time.

The secretary’s comments today are entirely consistent with the approach laid out by the president.”

Bloomberg: Iran for the first time sees the “possibility...