Houthis Failing in Yemen Could Bring the Iranian Regime Down Too 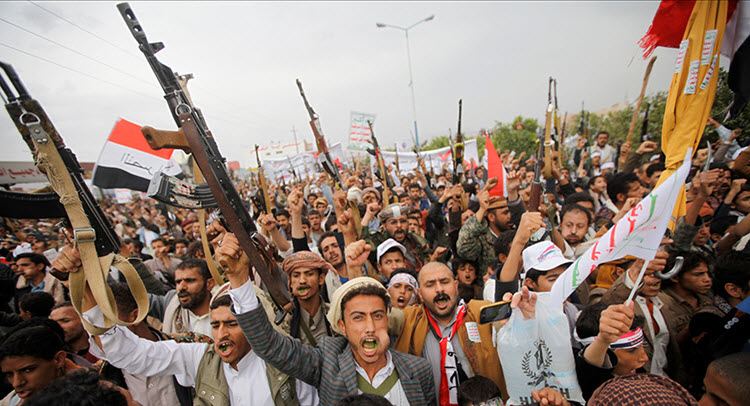 London, 7 Dec – The Iran-backed Houthis are quickly losing power in Yemen, as infighting between them and fellow rebel group the General People’s Congress (GPC) grows, and it is likely that they will take the Iranian Regime down with them.

This break up is not a sudden thing but was widely expected for a long time. Although the groups originally had shared interests, they no longer do, making an alliance fairly pointless.

The Houthis, who used the GPC in an attempt to gain some political legitimacy, are no more than an Iranian proxy and express far greater loyalty to the mullahs who kept them going for this three-year war than the Yemeni people.

While the Houthis wanted Yemen to essentially come under the Iranian Regime’s control, the GPC righty opposed this attack on Yemen’s sovereignty.

While some have suggested that it will be difficult to see what group, the Yemeni people will support, most Yemenis consider themselves to be Arab and, as such, will not accept the Iranian Regime’s rule and will support the GPC or the internationally-recognised government over the Iran—backed Houthis.

They see that the Houthi proxies have done nothing to benefit Yemen and instead have sent them to the brink of disaster. The United Nations has even described the current the situation in Yemen as “the worst humanitarian crisis in the world”, for which the Iran-backed Houthis hold the majority of the blame.

The backlash against the Houthis and their Iranian masters has gotten even worse following the assassination of former Yemeni president Ali Abdullah Saleh. Houthi gunmen, working on the order of the Iranian mullahs, shot the 75-year-old as he attempted to escaped Houthi-held Sanaa and posted a video of his lifeless body on social media.

His assassination, on Monday, was two days after he broke ranks with the Houthis over a severe disagreement and tried to resume talks with the current President Abed Rabbo Mansour Hadi.

In response to the assassination, Hadi urged the people in Houthi-controlled areas to rise up against the Iran-backed militias and told them that the Yemeni army which surrounded Sanaa was prepared to support any actions against the Houthis.

A spokesman for the legitimate government said: “The act is further proof that these militias adopt an ideology of exclusion. We call upon the Yemeni people to make the assassination of Ali Abdullah Saleh a turning point in the country’s history and encourage all people to join ranks with the legitimate government and against the evil terrorists.”

In Iran, a long night of fiery protests (Photo report – 5)