American Appeasement of Iran Is Over 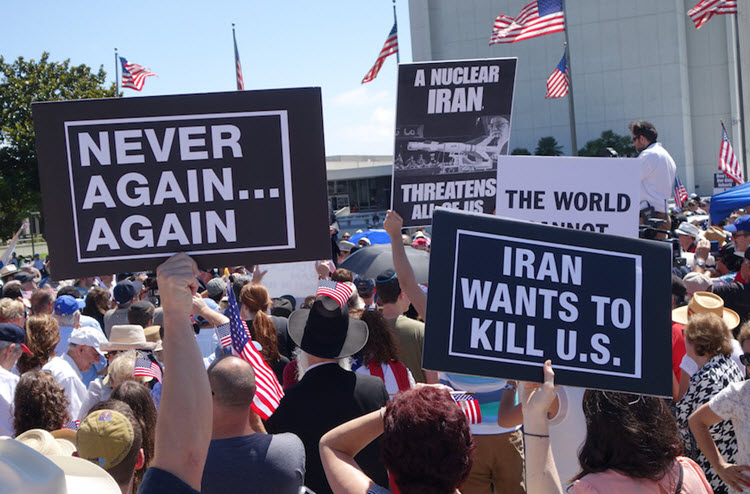 London, 19 Dec – Many are concerned with the idea that the USA may soon be at war with Iran and/or North Korea but confusingly, think that North Korea would be the most likely country.

At first glance, this seems legitimate because of the threat that North Korea poses to America’s Pacific allies, like Japan and South Korea, but unless there are some dramatic changes on the Korean Peninsula it is far more likely that the US will launch a military intervention against Iran.

Why? Well, war against North Korea would put South Korea in particular in severe danger, involve China unnecessarily, risk a nuclear weapons strike against the US, and has little support from the American people.

Professor Hunter from Georgetown University explains that the Iranian Regime is quite the opposite.

Iran’s military power is weak. Its air force and air defence system are so pitiful that a weeklong American bombing campaign could inflict insurmountable damage to Iran’s military and economic infrastructure. In addition, Iran cannot directly fight back against the US. Its missiles and speedboats are no match for American weapons, and even if they were, it’s a well-known fact that Iran much prefers to fight via proxies instead.

Most importantly, however, is strong public support in the US for an attack on Iran, because of its longstanding feud with Israel.

Hunter wrote: “Many [Iran hawks] had expected that after Iraq, Tehran would be the next target. Some were disappointed that Iran was not attacked first. For this group, a change in Iran’s behaviour or even a regime change is not sufficient. They want to see Iran’s capability to be a military and economic power in the region destroyed. With Iraq and Syria already out of the way, and with Egypt having become toothless, Iran is the only remaining Middle Eastern power that must be brought to its knees. It is the rebellious satrapy that should be tamed. As long as it has the rudiments of power, it cannot be trusted to behave.”

This also has widespread support from US allies in the Middle East- notably Saudi Arabia, Egypt, Israel, and the United Arab Emirates. Some even pressured former Secretary of State, John Kerry to bomb Iran whilst negotiating the nuclear deal.

Hunter wrote: “They have not changed their minds. If anything, they are even more eager now for such an operation.”

Even worse for the Regime, they have no ally that would risk their own skin to defend the Regime.

It is clear that American appeasement of the Iranian Regime is over, with several high-ranking Trump administration officials, like Ambassador to the United Nations Nikki Haley, indicating that intervention is on the cards. Even if war was not the final outcome, the Iranian Regime should consider this a warning about their behaviour.

AFP: The Iranian navy plans on deploying warships to...